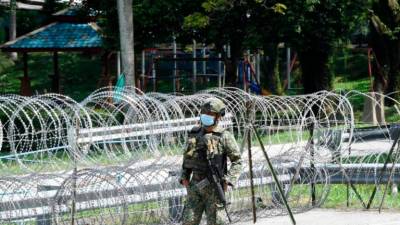 KUALA LUMPUR: Several localities in Sabah, Sarawak, Pahang, Johor and Kelantan will come under the Enhanced Movement Control Order (EMCO) for 14 days from Friday until June 24.

In Sarawak, the EMCO will be imposed on Kampung Sinar Budi Baru in Kuching.

Other localities are Felda Tembangau 1 and 3 near Bera and Felda Jengka 7 in Maran, Pahang; Felda Inas and LDA Inas in Kulai, Johor; and Kampung Kutan Tengah and Kampung Ketil in Tumpat, Kelantan.

“The EMCO is imposed with the aim to facilitate the Ministry of Health (MOH) to conduct early detection of Covid-19 cases so that the patients could be isolated as soon as possible while controlling the movement of the residents in the localities so as to prevent the disease from spreading to other localities,” he said in a statement today.

Meanwhile, he said the EMCO in Felda Tersang 1,2 and 3 near Raub, Pahang, has been extended until June 24 following local transmissions and new cases, as well as the fact that there were still 217 swab tests awaiting results.

The EMCO at Mukim Perak and Mukim Bangau in Temerloh, Taman Dato’ Tengku Paris in Raub, and Pekan Kemayan in Bera, Pahang, will also end tomorrow, a day ahead of schedule.

Of the total, 852 individuals were compounded and 33 remanded.

Among the offences were failing to record their details when checking into premises (178 individuals), not observing physical distancing (145) and not wearing face masks (144). — Bernama