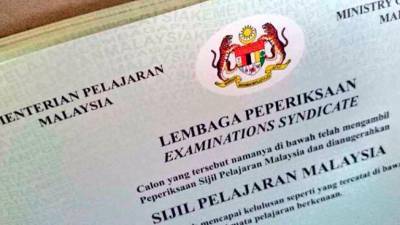 IPOH: An Orang Asli student Alieya Ashikin Haszrul Zainal from Sekolah Menengah Kebangsaan (SMK) Sri Tapah, Tapah has proven that Covid-19 was not a hindrance for her to excel in the Sijil Pelajaran Malaysia (SPM) 2020 examination.

Alieya Ashikin, who tested positive for the coronavirus two weeks before the examination and had to do revision at the quarantine centre, was thrilled to find out that she scored 4As when the SPM result was announced today.

“I admit that I don’t have much time to do revision and was worried that I would not be able to answer the exam questions. However, I still put in my best effort and never give up,” she said.

The second child from three siblings said she planned to pursue her studies at tertiary education institutions such as the Institute of Teacher Education to fulfil her dreams of becoming a teacher.

Meanwhile, Cheang Wen Jing from SMK Padang Besar Utara in Kangar, Perlis was happy to obtain 7As despite having to face many challenges in her studies due to the Covid-19 pandemic.

She explained that her family’s income was badly affected by the implementation of the Movement Control Order (MCO) last year, and being the first child of the family, she was all ready to help her parents make some extra money.

“My father is a carpenter and he could not work during the MCO so he has no income.

“However, my family insisted that I focus on my studies. So, at that time, we had to live off my father’s savings,” she said.

For Nur Maizatul Ain Mohamad Samsudin from SMK Astana, Kuantan, Pahang who had to borrow her brother’s laptop to catch up with her school lessons, the effort has finally paid off after she obtained 8As and 1D in SPM 2020.

“My second brother, Mohd Sharul Nizam, 29, lives in Lepar and he would drop by to lend me the laptop and I will return it to him after I finished using it.

“I got left behind in many classes but I will contact my teachers to get reading materials or even ask them to explain the subject that I don’t understand,” said Nur Maizatul Ain who lives in Kampung Badang.

For Anum Khadijah Anuar, her mother’s sacrifice in raising the family alone after her father died in 2006, has become her motivation to excel in SPM 2020.

The student of Kolej Datuk Patinggi Abang Haji Abdillah, Kuching, Sarawak, who hopes to become a doctor, obtained 9As in the examination.

“After my father died, my mother, Saliah Sonong, 60, has to take over providing for her six children. So this is my present for my mother and my family,” she said.

For Fatima Az Azhra Noor Mohammad from SMK Agama Maahad Muar, Johor, who obtained 11 As in SPM 2020, she was struggling with pain due to appendicitis surgery a few months before SPM.

“During the two months of recovery, I was unable to move a lot so my father, Noor Mohammad Borhan, 57, went to my school every day just to get the learning materials from my teachers.

“I’m also thankful because my friends and teachers are always there to help me. When I return to school, they were committed to ensuring that I don’t fall behind in the previous lessons,” she told Bernama.

Fatima, who wants to become a teacher, said she often recites Surah Al-Waqiah and Ar-Rahman to help her with her studies.

Meanwhile, Nadia Abdullah from Sekolah Menengah Agama Bugisiah who also scored 11As said her recipe was to wake up as early as 3am to make revision and perform supplementary (sunnah) prayer.

“For me, where there’s a will, there’s always a way. Although it was not easy to wake up early every day, I would do it anyway for my own good,” she said. — Bernama