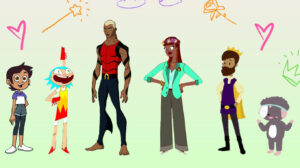 Insider has made a database that tracks LGBTQ+ and gender minority inclusion in animated children’s shows.

Ursula, Bugs Bunny, and Asami Sato. They are three of the 259 LGBTQ characters Insider found in cartoons.

Queer culture has historically been present in this space. But, small-screen LGBTQ representation both exploded and shifted over the past decade. https://t.co/h2WhmIPhfU pic.twitter.com/VzphTmG10V

It’s pretty cool, but the list isn’t 100 percent perfect — Young Justice is one of my favourite shows and I definitely noticed a missing character.

That said, it’s still a great list and interesting to see shows as old as Braceface, Clifford the Big Red Dog and Arthur offering LGBTQ content.