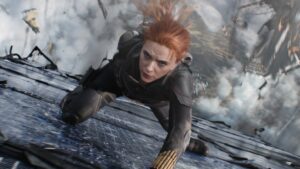 Black Widow will be available to stream at no additional cost on Disney+ starting October 6th, 2021.

Disney confirmed the date in its pre-order page for the Marvel superhero film, which will release on Disney+ exclusively via the ‘Premier Access’ paywall on July 9th, 2021. Black Widow will also release on July 9th wherever theatres are open.

Disney confirmed the simultaneous July Disney+/theatrical release for Black Widow back in March, following a year of uncertainty regarding what might happen with the film.

If you’d rather not wait until October 6th, you can pre-order Black Widow from now until July 8th on Disney+.

Set between the events of Captain America: Civil War and Avengers: Infinity War, Black Widow follows Scarlett Johansson’s superspy as she goes on the run and gets tangled in a dangerous conspiracy tied to her shady past.

The post Black Widow to become available on Disney+ at no additional cost on October 6 appeared first on MobileSyrup.