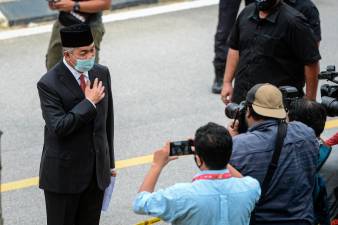 Umno president Datuk Seri Dr Ahmad Zahid Hamidi was the first to make his way to the palace today, arriving at 9.55am and leaving at 11am.

Ahmad Zahid, speaking to reporters outside the palace gates, said his discussion with the King revolved around several matters concerning the people’s interests.

The Bagan Datuk Member of Parliament said among others he conveyed Umno’s stand that the Emergency should not be extended beyond Aug 1 and instead issues related to the Covid-19 pandemic can be better managed if the Emergency was lifted.

He said the people were generally worried and anxious about the pandemic as it had affected their incomes and livelihoods.

“Umno’s stand is that Parliament should meet to protect the country’s system of democracy and to provide for accountability and checks and balances in all aspects of the country’s administration.

“Umno is of the view that Parliament is an important official platform for voicing out the people’s concerns and interests,” Ahmad Zahid said.

Asked on former prime minister Tun Dr Mahathir Mohamad’s proposal on the setting up of a National Operations Council (NOC), he said this matter was not discussed during his audience.

MIC president Tan Sri S. A. Vigneswaran also went for his audience, entering the palace at 10.45am and leaving almost one hour later, without stopping to speak to reporters.

Leaders of political parties including from the opposition have been summoned for audiences with His Majesty beginning Wednesday. Leaders from Sarawak are scheduled to have a virtual audience with Al-Sultan Abdullah on June 14.

So far, 10 leaders have been granted audiences by Al-Sultan Abdullah. — Bernama

In Port Dickson, clerk loses over RM700,000 in investment scam