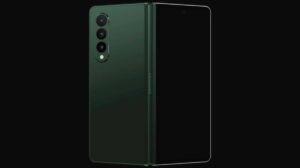 So far, we haven’t gotten an official look at Samsung’s Galaxy Z Fold 3 design, but this might be the next best thing. Toronto’s Dbrand has published a page for the upcoming foldable, giving us a look at the phone’s design.

Dbrand has posted images of the Z Fold 3 in three colour variants, black, silver and likely the flagship version, green.

The renders are close to what we’ve seen in the past, showing off the phone’s triple camera setup with three 12-megapixel cameras. The three shooters offer primary, ultra-wide angle, and telephoto lenses.

On the front of the device, there’s a selfie shooter with a 10-megapixel sensor, with a 6.2-inch cover screen. Moreover, there’s also a 7.5-inch 120Hz refresh rate display, according to the leaks, and a 16-megapixel shooter that lies beneath the display

Samsung is expected to unveil the device at its rumoured Unpacked event on August 11th.