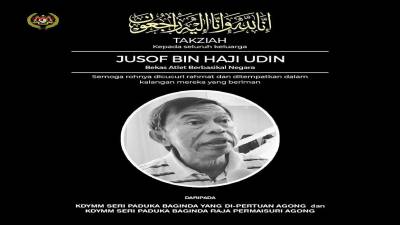 According to a statement uploaded to the Facebook page of Istana Negara, Their Majesties also expressed sadness over Jusof’s passing and hoped his family would be patient and remain strong in this time of grief.

“The King and Queen truly appreciate his service, contributions and sacrifices to the country.

“Their Majesties also prayed for his soul to be blessed by Allah and placed among the righteous,” the statement read.

He also represented the national cycling team at the Asian Games in India in 1982 and was active in associations, especially the National Athletes’ Welfare Foundation (Yakeb), and always took part in programmes organised by the foundation. –Bernama