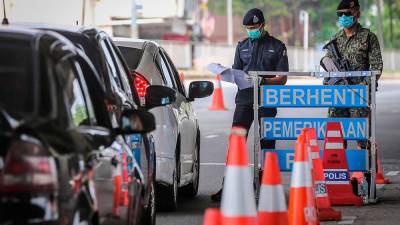 KUALA LUMPUR: A total of 5,594 vehicles were ordered to turn back at roadblocks nationwide since yesterday for flouting standard operating procedures (SOP) set for interstate and interdistrict movements.

Bukit Aman Internal Security and Public Order Department director Datuk Zainal Abidin Kasim said the number of vehicles ordered to turn back was among 456,019 vehicles inspected at the roadblocks.

“In addition, 355 compounds were also issued at the roadblocks for flouting the SOP of the movement control under the National Recovery Plan (PPN),” he said in a statement to Bernama today.

On Sunday, Deputy Prime Minister Datuk Seri Ismail Sabri Yaakob directed security forces personnel to be prepared to face an increase in the number of vehicles trying to cross states without permission in conjunction with the Hari Raya Aidiladha celebration.

The government still does not allow interstate and interdistrict movements in Phase One and Two of the PPN. — Bernama