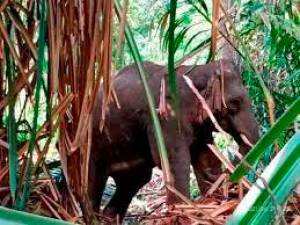 IPOH: The Department of Wildlife and National Parks (Perhilitan) has captured a bull elephant weighing about two tonnes following complaints from villagers at Felda Bersia Timur in Gerik.

Perak Perhilitan director Yusoff Shariff said the Perak State Elephant Action Unit started to track down the wild animal named Yob Daha at 7 am on Monday and managed to catch the wild animal at about 10 am the same day.

“The bull elephant is estimated to be 18 to 20 years old and weighs two tonnes. The department received several complaints on the damages it had caused on villagers’ crops involving bananas, coconut and oil palm trees,” he said in a statement today.

Yusoff said the Perhilitan office in the Gerik district received the first complaint of damages on July 13 before they started to track it down.

He said the elephant would be relocated to the National Park at 8 am tomorrow, adding that the operation would involve 15 workers from the Kuala Gandah National Elephant Conservation Centre and eight Perak Perhilitan employees. -Bernama