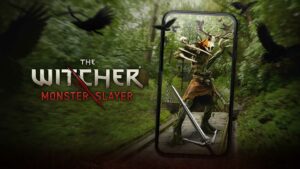 CD PR says more than 100 creatures “both old and new” will be featured in total. As the game’s title suggests, however, you’ll actually be defeating these monsters rather than capturing them like in Pokémon Go.

To do this, you’ll need to “track” monsters in the real world based on location, time of day and weather conditions. You’ll also be able to equip new weapons and armour and brew potions to better prepare yourself before a fight.

Beyond the monster-slaying, CD PR is promising quests featuring “deep, story-driven adventures. However, the game is set many years before the time of series protagonist Geralt of Rivia, so expect to see new characters instead.

You can download The Witcher: Monster Slayer on Android and iOS. It should be noted, though, that some users are experiencing launch-day technical issues, which CD PR says it’s working to fix.

While CD Projekt has dabbled in Witcher mobile games before, the company is best known for The Witcher 3: Wild Hunt, the massively popular console/PC open-world RPG. More recently, the publisher put out Cyberpunk 2077, an open-world sci-fi game that was surrounded by controversy due to technical issues and false promises.