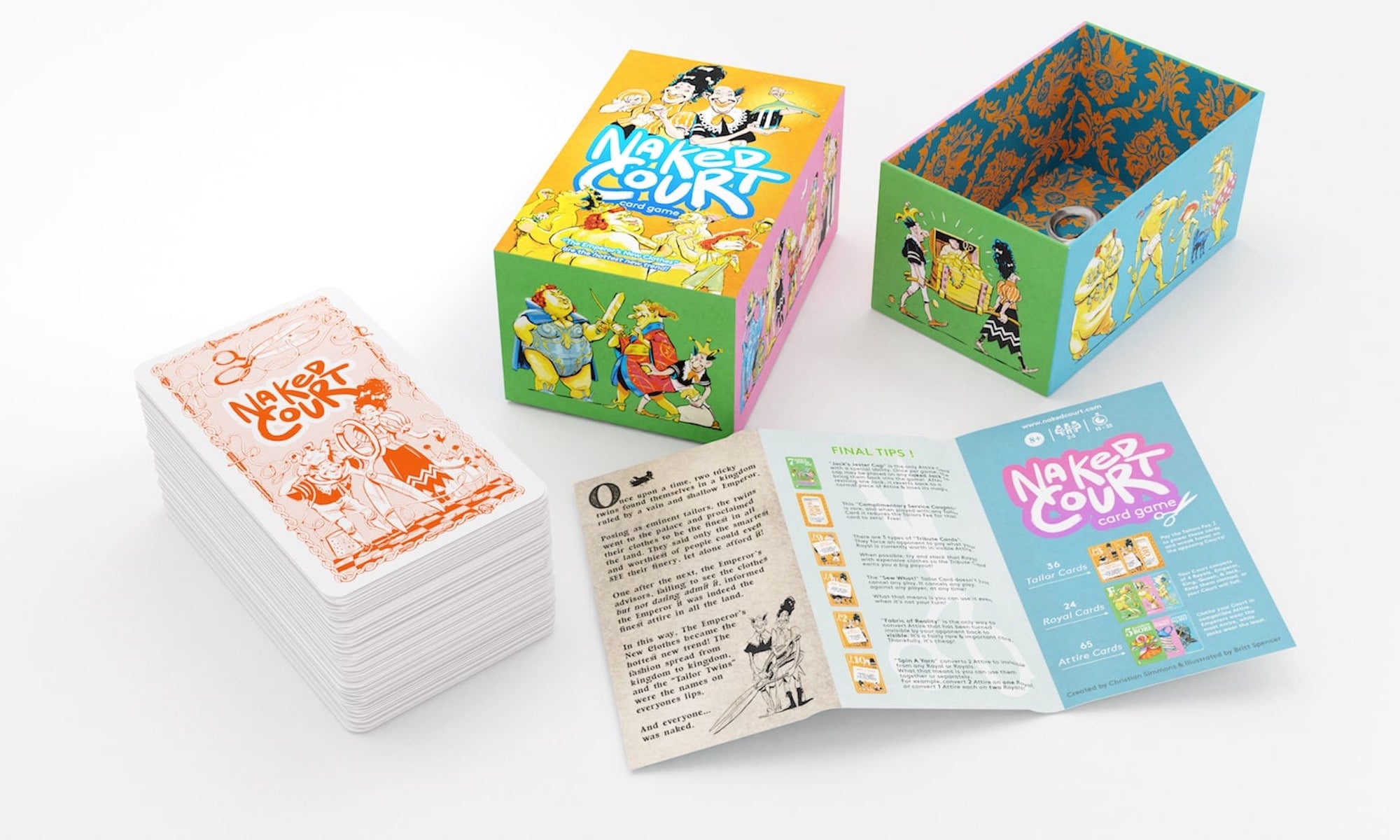 Push the boundaries on game night with the fast-moving card game, Naked Court: The Card Game. Two tricky tailor twins arrive at the palace and proclaim their clothing to be the finest in the land. So fine, that only the smartest and worthiest can see it. Will your Court of Royals fall prey to their tactics? Play this game to find out.

Check out how to play this fairy tale-based card game

Your first task is to create your Court of Royals during The Royal Entrance. Then, you must try to keep them clothed as your opponents attempt all the tricks at their disposal to denude them. Meanwhile, the game features more than two genders as the accepted norm with male, female, and androgynous characters.

But each game has its caveat. And in Naked Court: The Card Game, Royals only wear clothing that matches their gender identity. So Royals that are male only wear Attire for male or androgynous characters. Meanwhile, an androgynous Royal wears apparel in Attire of all genders.

Assemble your court with the Royal Cards

The Attire cards include items like a coronation gown, ornate dagger, embellished trousers, and a corncob corset. As you can see, some of the options are designed to make you chuckle. Meanwhile, the artwork features bright hues and original drawings.

The Attire cards are also the game’s currency. Use them to pay the tailor twins to stitch up a new, nude garment for your opponents. Otherwise, you can employ them to help your own Court. As we mentioned above, any Attire cards you use must match your Royal’s gender.

Use the Tailor cards to denude your opponents

This fast-moving game also comes with 36 Tailor cards. After you pay the Tailor’s fee, you can employ them to wreak havoc on your opponents’ Courts. But you’ll have to pay with care. Because the item you pay with might be the article of clothing you need to stay clothed and in the game. That’s right; you’re literally paying with the shirt off your back.

Naked Court: The Card Game consists of two acts: The Royal Entrance and The Battle Royal. We touched on The Royal Entrance earlier, but to go into more detail, this is when you assemble your Court. You also choose Attire for each Royal, depending on how many items each is allowed. For instance, an emperor can wear up to four Attire cards while a Jack sports just one.

Once you’ve assembled your Court and its attire, you can play in The Battle Royale. At this point, you can begin playing with the Tailor cards and pay their fees. You can pay with any combination of cards from your Court and/or hand. When you convert the last piece of Attire on an opponent’s Royal, you receive that Royal’s attire cards.

Have a look at these special feature cards

Of course, there are a few wrenches in this card game that can either help or hinder your efforts. One is the Jack’s Jester Cap. It’s the only card with a special ability. Place this cap on any naked Jack once per game to bring it back from shame.

There’s also the Sew What! Tailor card that cancels any play, against any player, at any time. There are other cards that can help you out of a bind, and they’re part of what makes this game so unpredictable—and fun.

Check out these game specs

Okay, games don’t really have technical specs, but here are some other important game details. This fast-moving card game is suitable for ages 8 and up and works best with groups of 2–5 players. So it’s perfect for a family game night or a group of friends. A game typically takes anywhere between 15–35 minutes to play and makes a great addition to your tabletop game collection.

Naked Court: The Card Game is a fun way to spend time with family and friends. Its premise is a hoot, and everyone will have a blast making their opponents’ Royals sit nude in the middle of the table for all the world to see. If you’re looking for a hilarious, raucous game to play while you sip a summer drink, go for this one.

You can preorder Naked Court: The Card Game on Kickstarter for $29. What are some of your favorite tabletop games? Let us know about your recommendations in the comments.

Police set up special team in look into allegations of organised crime, gangsterism in Ipoh