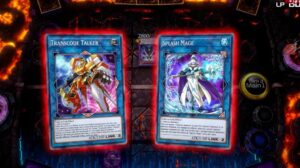 Konami has announced Yu-Gi-Oh! Master Duel, a card-battling game that the company calls “the most complete Yu-Gi-Oh! TCG digital title yet.”

Master Duel has more of a focus on the original trading card game, compared to previous titles that were centred on the Yu-Go-Oh! manga or anime series.

A release date hasn’t yet been confirmed, but the game is coming to Android, iOS, Steam, PS4/PS5, Xbox Series X/S, and Xbox One. Supported devices will offer 4K graphics.

The Nintendo Switch will also be getting a new game called Yu-Gi-Oh! Rush Duel, which focuses on the anime Yu-Gi-Oh! Sevens. Rush Duel will be released this fall.

There’s also going to be a Yu-Gi-Oh! Cross Duel, which will offer unique four-person duelling and come to Android and iOS. No other details were revealed.

The post Yu-Gi-Oh! Master Duel will be more like the original card game than previous entries appeared first on MobileSyrup.