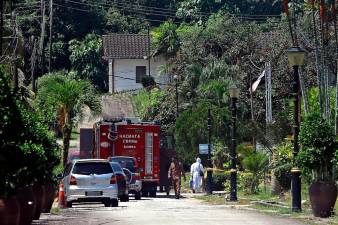 PORT DICKSON: A staff of the Bukit Pelanduk Health Clinic here died while three others became unconscious after they were believed to have inhaled carbon monoxide gas due to a leaking exhaust pipe of an ambulance they were in this morning.

Negeri Sembilan Fire and Rescue Department assistant director of operations Ahmad Mukhlis Mokhtar said rescuers were rushed to the scene after receiving a call about the incident at about 9.50am.

“Preliminary investigations by the Hazardous Materials (HAZMAT) Unit found that there were no leaks in the area of ​​the health clinic other than the oxygen level in the building being normal. Preliminary information also found that the four victims had fainted in the ambulance,“ he told reporters here.

Meanwhile, the department’s HAZMAT Unit Head TPgB II Mohammad Idris said the 29-year-old victim had initially complained of chest pain before fainting at the clinic while the three others, who were his colleagues, lifted him into the ambulance to be sent to the Port Dickson Hospital, which is 33 kilometres away.

“However, upon arrival at the hospital, when the back door of the ambulance was opened, the three other male staff who were with the victim were also found unconscious while he had died,“ he said.

It normally takes an ambulance about 20 to 30 minutes to get from the clinic to the Port Dickson Hospital.

However, he said the cause of death of the victim could not be determined yet whether it was from the gas or not pending the autopsy.

He said the driver and another staff member at the front did not suffer any injuries and that the three other victims were in stable condition.

He added that further investigations were still ongoing but confirmed that the ambulance’s exhaust system was leaking.

He said that a similar incident also happened yesterday involving a health worker who also fainted while in the same ambulance but his condition was reported to be stable. — Bernama