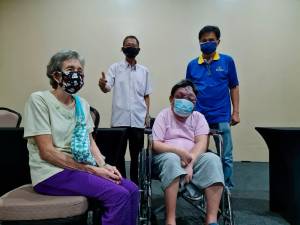 PETALING JAYA: “Elephant-face” sufferer Leong Chee Ming “Ah and his elderly mother, Hee Thye Tai (pix), have been vaccinated at the Wizard of Oz International Convention and Exhibition Center at the MCA Puchong Conference and the Federal Development and Public Security Committee of Seri Kembangan New Village on Sunday.

When MCA Puchong distributed food baskets to the poor at the low-cost people’s public housing (PPR) flats at Tanjung, Sri Kembangan, its member had discovered Leong and his mother had not yet been vaccinated. The volunteers on-site immediately assisted in registering the duo through Mysejahtera. Both received their appointment notices on July 17.

“MCA Puchong will try to locate more people like Leong and his mother. In addition to providing material assistance, we will also help them register for vaccination and arrange to transport them to the vaccination centre (PPV),” MCA Selangor State Liaison Committee Vice-Chairman Liew Yuen Keong said today.

The second dosage for Leong and his mother is scheduled on Aug 8.

There was a remission in Leong’s condition in 2021, and the sarcoma from the lower lip to the chin continues to enlarge more and more. However, as they do not have the financial means, while the condition at present does not affect their daily routine, there are no plans to undergo an operation.

His mother said she is worried that she could pass away at any time, and there would be no one to take care of Leong, who has been afflicted with this rare disease since he was a child.

He was later diagnosed with Hemangioma and Vascular Malformation. The sarcoma on his face will increase year by year.

Although many operations have been performed earlier, the condition would still recur. The facial sarcoma has been growing, and it is also accompanied with inconvenience as there is pus in both ears, and slurred speech. At present, one eye is blind, leaving the other with limited vision.

Currently, Leong and his mother support their daily living with RM400 disbursed by the Social Welfare Department every month.