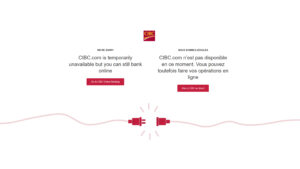 It appears several websites and online services are down for some Canadians. The scope seems quite large — several banking services, social networks like TikTok and gaming services like Steam and PlayStation Network aren’t accessible right now.

It’s not clear what’s behind the massive outage, but several of the sites show a ‘DNS failure’ message, while other sites display simple “temporarily unavailable” messages.

If you’re experiencing an outage with any services, keep an eye on Downdetector to see if there are any issues. Let us know down below if you’re having issues with any online service not mentioned above.