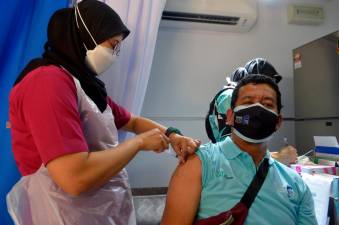 We should be on the side of strictness, at least until we reach a 100% vaccinated population in current and historical places under the enhanced movement control order (EMCO), high-risk and cluster areas, as well as all 100% vaccinated adult populations.

Health Director-General Tan Sri Dr Noor Hisham Abdullah was reported to project that a 40% vaccinated population will be needed to reduce new cases of Covid-19 infection.

On this note, National Immunisation Programme coordinating minister Khairy Jamaluddin was reported forecasting this figure to be reached by the end of August, and a 60% vaccinated population by the end of September.

Prime Minister Tan Sri Muhyiddin Yassin has projected that all adults would be fully vaccinated by October. These projections are only two to three months away.

We are already past mid-July, and the vaccination rate is progressing well (one of the highest in the world).

We should hold on to stricter movement controls just a little longer. Hasty and unguided actions can derail progress.

The Delta variant is currently the second most prevalent in the nation, but it could become dominant given the combination of higher infectivity, airborne transmission, and higher human interaction.

Needless to say, the government has to go all-out in assisting people and businesses to stay afloat during this period.

Firstly, on the matter of increased freedom of movement for those fully vaccinated, it’s important to know that different vaccines may confer different levels of protection against the virus.

A recent study by researchers from the University of Hong Kong on health workers reported that those receiving the nucleotide-based Comirnaty vaccine had substantially higher levels of antibodies compared with inactivated virus type (vero cell) vaccine of CoronaVac.

Malaysia has reportedly ordered 76.1 million doses of vaccines, 23.4% of which is Sinovac, making it the second largest after Pfizer.

If the study holds true, then a significant portion of the population could have relatively significantly lower antibody levels that could be unprepared to take on the rising spread of the virus, particularly from the increasingly dominant Delta variant.

Authorities must urgently study and reconsider a mix-and-match vaccine strategy such as those being considered by Thailand, the Philippines, and many other countries driven by similar concerns.

Noor Hisham has reportedly dismissed any notion that Sinovac is less effective than Pfizer’s vaccines, stating that both are effective at preventing severe disease and hospitalisations.

He cited a report from the New England Journal of Medicine regarding Sinovac’s performance in Chile which was apparently similar to what Israel’s ministry mentioned regarding Pfizer’s performance.

Therefore, Malaysians should go for whichever vaccines that are immediately available to them.

Secondly, there are real immunological uncertainties. Not all those vaccinated may be immunised and the risk of waning immunity may require boosters which are unlikely to be available in the near term.

It’s reasonable to postulate that the ones successfully immunised earlier on in the National Immunisation Programme (NIP) may have correspondingly higher risk of diminished protection.

Assuming immunity is retained during an exposure to the virus reinfections can still happen, particularly with new varints such as Delta.

Fully vaccinated people can be carriers too, especially in the absence/insufficient mucosal immunity.

If they are exposed to non-protected individuals, they could be sparking sporadic and cluster cases.

It was reported that by mid-June, 97% of new cases in the UK were Delta infections and by July 2, half of these new cases were in fully-vaccinated individuals.

Similar reports were observed in Israel where half of the new surge in cases there were in fully-vaccinated people.

These countries have in fact reinstated restrictions precisely to contain the situation. Even in the UK, they have observed not only rising cases but an increase in hospitalisations and deaths (as of July 17) as the higher spread of infections has a higher chance of reaching unvaccinated pockets of the population, many of whom could be vulnerable individuals.

If this is the outcome in the UK and Israel, what would be the outcome of increased freedom of movement for Malaysia with its relatively low percentage (and potentially uneven level) of a protected community?

That said, reduced restrictions are likely to be supported with the notion that it should be doable as long as people adhere to strict personal standard operating procedures (SOP).

Are we really going to delude ourselves into assuming people and businesses would be able to self-monitor strict adherence to SOP?

Even if, somehow, we are able to monitor and enforce this, we have to know that the combination of a more infectious virus and an airborne route of transmission is challenging even for existing SOP such as masks and physical distancing to be sufficient.

Cases of “fleeting” contact have prompted nations such as Australia, China and New Zealand to reconsider quarantine centre designs.

Until this can be achieved, getting the entire population at current and historical places under EMCO, high-risk and cluster areas vaccinated is the only option for now.

Tiny aerosolised droplets can carry high loads of a more infectious strain over longer distances, which is why Noor Hisham said that the Delta variant and other new variants are airborne and can infect a person within a mere 15 seconds. There have been similar news reports locally and globally.

What would happen if vaccinated groups are allowed more freedom of movement but end up being asymptomatic carriers, and then return home to infect unvaccinated people who are more prone to severe outcomes?

Even before the Delta variant, inter-state travel for Hari Raya Aidilfitri has contributed to many clusters which may have seeded subsequent waves.

Tighter controls such as a 72-hour swab test to enter Kelantan state may not be foolproof. Thus, it would be unwise to allow inter-state travel given the current conditions.

Virus-containing droplets from the nose and mouth are not only expelled through sneezing or coughing but even through breathing and talking.

Therefore, there should be enforcement of wearing masks indoors and crowd density control.

This also may not be the right time to allow dine-ins as most places are indoors with poor air circulation, and most of the time people would take off their masks to eat and drink.

It is hard to monitor and enforce strict distancing, masking and physical hygiene rules. If need be, only outside dining with good airflow can be considered.

Following a similar line of reasoning, it’s clear that congregational prayers at places of worship should not be allowed.

The traditional one metre distancing and poor airflow is unlikely to be sufficient to stifle transmission.

Not to mention crowd control (number of people and density) would be hard to enforce.

Place of worship may also have higher numbers of elderly visitors, who are more at risk of severe symptoms.

In short, allowing Hari Raya Haji congregational prayers was a bad idea. This is true for any other places of worship.

In fact, any unnecessary high foot fall events and places should be strictly prohibited for all vaccinated and unvaccinated people.

Similarly, it may be a little premature to reopen schools in September. Schools should be reopened only after 100% of adults have been vaccinated, which has been projected to be achievable by the end of October.

In this case, even if kids become carriers, most adults are protected (though the potential issue of different levels of protection from different vaccine types remains, and must be addressed!).

Children can be good carriers, collectively serving as a reservoir for the virus to keep on being transmitted, and continuing exposure to adults.

Peak spread and therefore, the number of cases has been predicted by mid-September.

Let’s get past the peak and meet these vaccination targets before we consider lifting movement restrictions for the sake of more sustainable normalcy.

Ameen Kamal is the Head of Science and Technology at EMIR Research, an independent think tank focused on strategic policy recommendations based on rigorous research. Comments: [email protected]