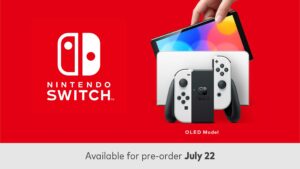 Nintendo has confirmed that pre-orders for the upcoming Nintendo Switch (OLED model) will go live in Canada today, July 22nd.

Nintendo only says “specific” retailers will be offering pre-orders, although it didn’t mention which ones. So far, The Source has pre-orders live on its site for the Neon Switch OLED, while Best Buy has both the White and Neon.

Meanwhile, the official Walmart Canada Gaming account has said it will have pre-orders sometime later today in “limited quantities” online only. At the time of writing, EB Games‘ official Twitter accounts have not yet said anything about Switch OLED pre-orders. However, Twitter user Lbabinz shared an email from EB Games pointing to pre-orders going live at the retailer at 2pm ET in-store and online.

Given that we still don’t know the exact participating retailers or pre-order timing, we’ll update this story once more information becomes available.

The Switch (OLED model) will release on October 8th for $449 CAD. Among its improvements over the current $399 Switch are a 7-inch OLED screen, a wide adjustable stand and 64 GB of internal storage.

Pre-orders opened in the U.S. exactly one week ago.