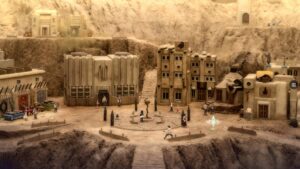 The 58-piece soundtrack was composed by the legendary Nobuo Uematsu, the man behind many of the iconic Final Fantasy games’ scores. Fantasian marked the latest collaboration between him and Mistwalker head Hironobu Sakaguchi, the creator of the Final Fantasy series.

However, Sakaguchi told MobileSyrup in March that Fantasian may be Uematsu’s final full game score, given his age and prior health complications. Therefore, fans will surely want to savour every bit of it.

It’s important to note, though, that the Apple Music release encompasses Fantasian‘s entire soundtrack, while only the first part of the game has been released so far. This means that if you don’t want to encounter spoilers, you might only want to listen to some of the earlier songs.

The second part of Fantasian is currently in development and will release sometime later this year.

The Fantasian soundtrack can be streamed on Apple Music here. Apple Music costs $9.99/month and is included in an Apple One subscription bundle, which starts at $15.95/month.

Apple Arcade, meanwhile, costs $5.99/month on its own and is also included in Apple One.