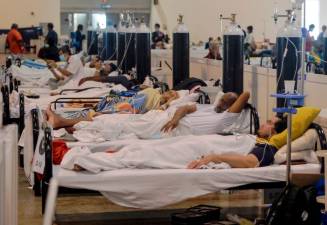 PETALING JAYA: A threat to take disciplinary action against frontliners who use social media to highlight shortcomings in the public healthcare system has come under criticism.

The Human Rights Commission of Malaysia (Suhakam) said rather than act against the whistleblowers, the authorities should thank them for raising such issues.

Suhakam commissioner Jerald Joseph pointed out that there is already a serious crisis within the public healthcare system as hospitals come under increasing stress.

“To its credit, the government has quickly addressed the issues brought to light but it should not punish those who highlight such failings,” he said.

Many photos and videos depicting deteriorating conditions at hospitals in the Klang Valley have appeared on social media recently, showing patients sleeping on the floor.

“Disciplinary action, including dismissal, can be taken against any officer for disobeying orders and tarnishing the image of the public service,” Zukarnain said in the memo, in reference to videos of chaotic conditions at the hospital in Klang.

Jerald described the reaction by Zulkarnain as “very old school” and an “outdated style of governance”.

“The people have a right to know what is happening. It should not be (treated) as a security concern.”

He said it is the duty of the government to keep the people informed on what the situation is on the ground during a pandemic.

“Officials must not be so defensive,” he said, and dismissed claims that such revelations on social media were attempts to sabotage the reputation of those in the civil service.

“Your primary duty is to the people and you are answerable to them.”

“Suppression of information is a regressive act,” he said, adding that sensitive information should be withheld only in exceptional instances, such as a border incursion where national security is under threat.

“All other matters should not be swept under the carpet.”

International Islamic University Malaysia assistant professor Dr Shafizan Mohamed pointed out that there is a delicate balance between speaking the truth and inciting panic.

“Information is key right now, but there is also a need to ensure that whatever information that is released is credible,” she said.

“I believe the staff at the hospitals may feel that they have to resort to making public statements because of a lack of action by the government or the hospital.”

However, she said there should be a limit to how far the staff is allowed to go to express concern, especially in areas such as healthcare.

“We are in a dilemma of having to handle a health crisis as well as a crisis of information,” Shafizan said.

“Although frontliners are often bound by a code of conduct and regulations, we should not silence those who have something to say.”

She suggested a channel of communication be put in place to allow them to express themselves comfortably.

Relate Malaysia clinical psychologist Andrea Clark said as the pandemic has taken a heavy toll on frontline staff, they need to be supported now more than ever.

“They are at greater risk of depression, burnout, anxiety and even post-traumatic stress disorders due to the increased stress and burden they have to carry during this time,” she added.

“We should examine how we can come together as a community, organisation and nation that listens to and supports one another.”