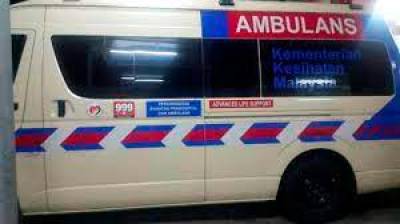 SEREMBAN: The ambulance carrying Bukit Pelanduk Health Clinic staff believed to have suffered a gas leak that caused them to lose consciousness upon arrival at Port Dickson Hospital yesterday morning will be sent to the Public Works Department for further investigation.

She said that members of the Hazardous Material Unit Team (Hazmat) had conducted an investigation and did not rule out the possibility of a gas leak in the ambulance.

“Therefore, to ensure the continuity of the clinic’s emergency services, the service will be provided by the nearby health clinic and also the Port Dickson Hospital,“ she said in a statement here yesterday.

Commenting on yesterday’s incident, she said three health workers, namely a medical officer and two assistant medical officers sent a patient who was also their colleague, to the Port Dickson Hospital, after the latter complained of chest pain and fainted at about 8.30 am.

Dr Harlina said the patient was suspected of having a heart attack and was in critical condition at the time of the incident.

However, upon arrival at Port Dickson Hospital, all of them were found unconscious and immediate assistance and treatment was given to all the victims.

“All the health workers involved are now in stable condition and are still receiving treatment at the Port Dickson Hospital. However, the patient died, and the department is waiting for a full post-mortem report to identify the cause of death,“ she said. –Bernama