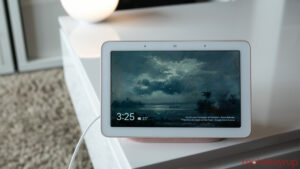 Google is testing a new ‘Weather Frog’ feature that brings an animated weather experience to Nest Hubs and smart displays.

9to5Google notes that the tech giant is testing the new background ‘Photo Frame’ option, which brings the Weather Frog from mobile Search to smart displays.

The Weather Frog has been in the testing phase since last September, and appears to be rolling out to more users in recent weeks. It’s worth noting that it hasn’t officially rolled out to all users and it’s unknown when this may be the case.

Users will be able to see the new option when they head into their on-device background settings and select the option to change the photo frame. It’ll appear above the traditional options for Google Photos, Art gallery and Fullscreen clock.

With the new feature, users will see the current weather condition and temperature in their area, along with the next two days of forecasts displayed next to the time.

The background itself will update throughout the day to reflect live weather conditions, and they all involve the Weather Frog. Some of the scenes you may see include the frog hiding under a pot or having a picnic.