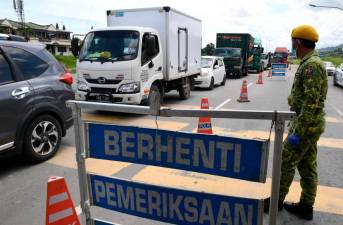 KOTA BHARU: The People’s Volunteers Corps (Rela) is intensifying ‘Ops Landai 2.0’ during the current total lockdown in areas identified as hotspots or Covid-19 red zones in the state to ensure the public complies with the Covid-19 standard operating procedure (SOP).

Based on data issued by the Kelantan Health Department, as of yesterday, 14 sub-districts in Kota Bharu were categorised as red zones, followed by Pasir Mas (eight sub-districts) Bachok (seven), Tanah Merah (four), Pasir Puteh (six), Tumpat (six), Jeli (two), Machang (two) and one each in Kuala Krai and Gua Musang.

Kelantan Rela director, Mior Muhammad Taufik Mior Burhanuddin said the patrols under the operation were implemented based on the data of high-risk areas issued by the Ministry of Health (MOH).

“A total of 44 personnel and officers are involved in Ops Landai, and they will patrol the villages in areas with high human traffic including supermarkets, mosques and banks.

“The operation involves one team in each district in the hot spots who will patrol the area for eight hours a day and conduct spot checks. This effort has shown good results as the Covid-19 cases in Kelantan are going down,’’ he said.

Commenting further, Mior Muhammad Taufik said 530 Rela members were on daily duty in all the districts in the state since the implementation of the Movement Control Order (MCO) in March last year.

“We have never stopped our duty. In fact, it’s increasing from day to day since the implementation of the MCO in March last year, especially at roadblocks, quarantine centres and vaccination centres in the state,” he said.