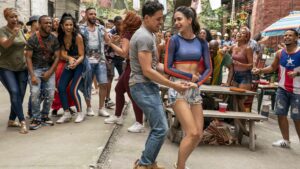 Although Ontario is finally entering ‘Step 1’ of its reopening plan on June 11th, indoor theatres will remain closed until Step 3.

Thankfully, Warner Bros. has been bringing its films to premium video on demand (PVOD) platforms amid the mass theatre closures, and that’s a trend that will continue with In The Heights.

As it has done with its previous big 2021 films like The Conjuring: The Devil Made Me Do It, Warner Bros. is making In The Heights available in both theatres (where applicable) and on PVOD when it releases on June 10th.

This means that if you can’t make it to a theatre, you’ll be able to rent the highly-anticipated musical drama for $24.99 CAD for 48 hours on Amazon Prime Video, the Cineplex Store, Google Play and iTunes. Otherwise, the film will eventually come to Crave at a yet-to-be-confirmed time.

Based on Lin-Manuel Miranda and Quiara Alegría Hudes’ musical of the same name, In The Heights follows a New York City bodega owner who saves all of his money as he hopes for a better life.

It’s worth noting that Warner Bros. has officially released the first eight minutes of the film — you can check that out here.

The post Here’s how to watch In The Heights in Canada appeared first on MobileSyrup.