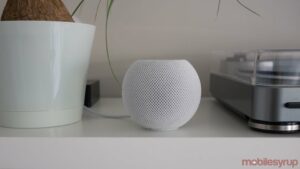 While Siri finally making its way to third-party devices is a welcome shift that moves the voice-activated assistant more in line with Amazon’s Alexa and Google Assistant, the process is a little more complicated than some likely expected.

In order for Siri to work with a HomeKit-enabled third-party device, that smart home product needs to connect directly to Apple’s HomePod mini, which then acts as a conduit between the two devices. Apple says that this means that third-party companies won’t be able to view your Siri voice commands. While true, this will also likely help sell more HomePod minis.

What’s unclear is if the Apple TV 4K (2021) and the now-discontinued HomePod will also be able to act as a hub for Siri with third-party devices. The only third-party device announced so far that supports Siri is Toronto-based Ecobee’s thermostats. It’s unclear how many other smart home device manufacturers are working on bringing Siri support to their devices.