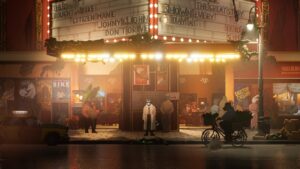 Have you ever had a run-in with a raccoon?

Given their tendency to go dumpster diving, it’s quite possible that you’ve encountered one prowling outside your house, or perhaps in a dark alleyway.

But what would you do if a group of raccoons was gathering in your backyard? This is what happened five years ago to Vancouver-based indie game developer Nikita Danshin, and for him, the solution was to frantically drive them away with a trumpet he had in his home.

While it makes for a fun story in hindsight, it gave Danshin and the rest of his ‘Eggnut’ team — who were, at the time, brainstorming for a sci-fi experience — a completely different basis to work with for its first game. Enter Backbone, a new post-noir narrative adventure game about a raccoon private investigator, Howard Lotor, who gets caught up in his biggest case yet.

After settling on the idea of a raccoon protagonist, Danshin knew he wanted a dystopian setting for Backbone, and he opted for none other than Vancouver itself.

“We found this saying that ‘Vancouver never plays itself,’ says Danshin. “Movie companies come to Vancouver to film New York, San Francisco — all sorts of different places in the U.S. […] and we’re just like, ‘let’s show it as is.’”

This meant going around and taking as many photos of the city as possible for research. 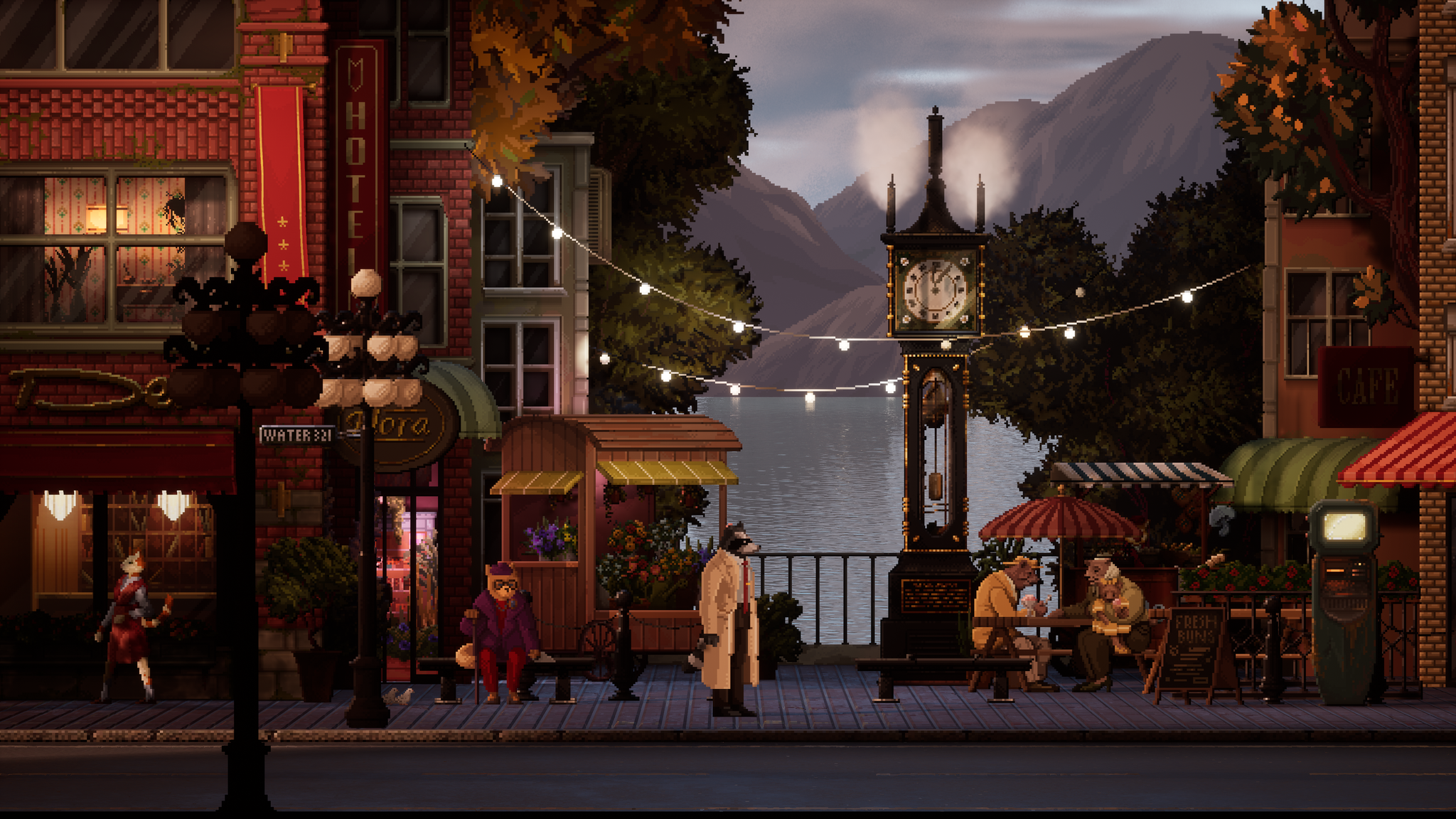 “We went to the Police Museum to look at like old pictures of what happened [and] high importance buildings like Victoria Hotel, or Marine Building. We’ve done lots of the investigations this way, like ‘how do you get inside that building legally?’ and take photographs of it and represent that inside the game. So there’s a lot of actual Vancouver [in Backbone], even though we twist it in a totalitarian way.”

According to Danshin, Vancouver lent itself naturally to the kind of dark detective fiction the team was looking to create.

“Vancouver has a very extensive noir-esque history, starting from the 1920s to 1960s. Vancouver has been very definitive of that era because it has lots of new immigrants coming in,” he says. “A lot of places in Vancouver just breathe that history, but that’s never told. It’s actually more noir of a city than Chicago or New York, but nobody knows that.”

The immigrant angle is a personal one for Danshin, who came to Canada years ago from Russia. Likewise, many developers on the 18-person team are still located there, with a few others based in the U.S. and the Netherlands. Danshin says these international roots helped inform how Eggnut crafted its version of dystopian Vancouver. 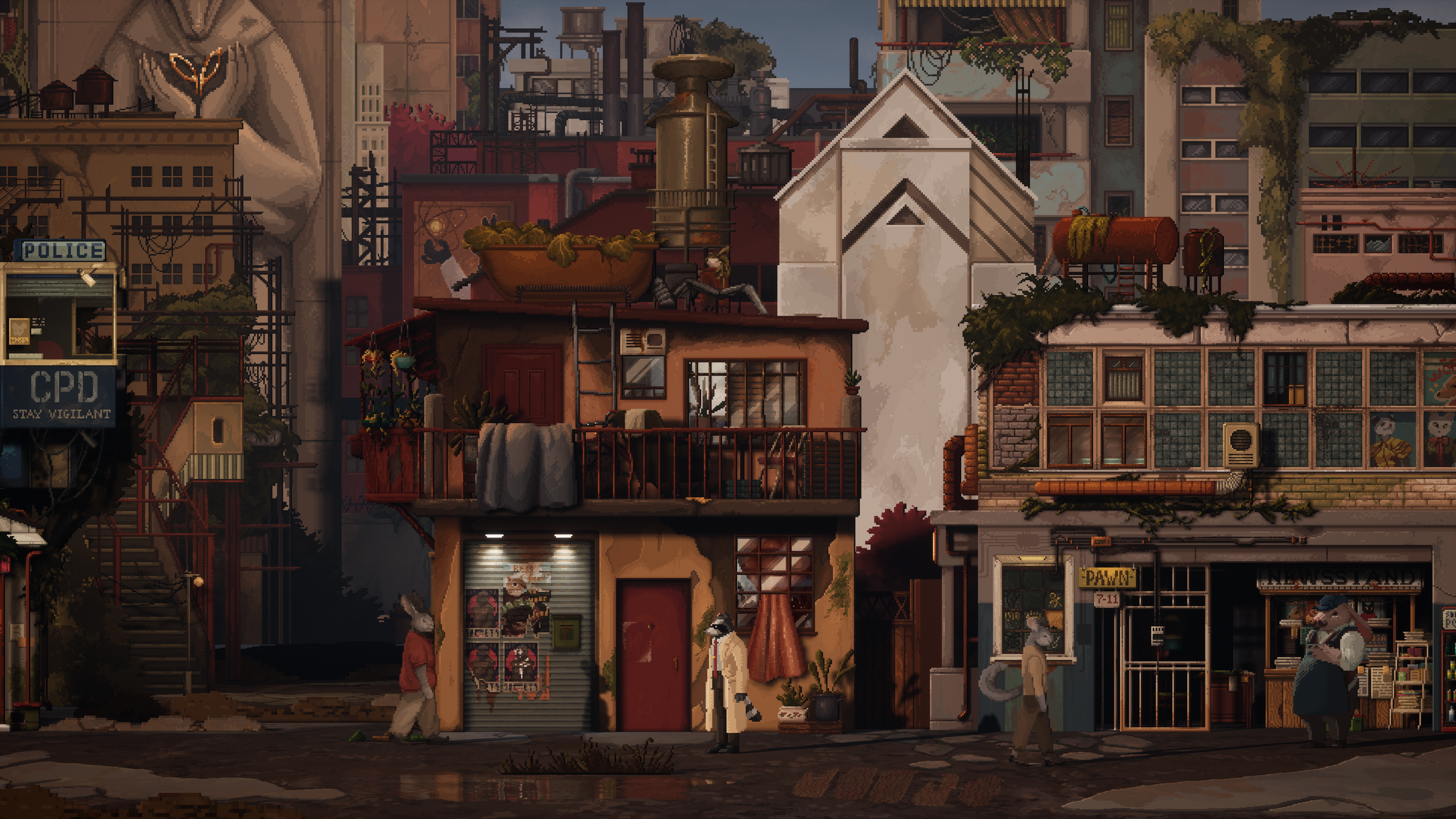 “Basically, it’s our take on modern society, but in the noir style. There’s a lot of conversion of what a Vancouverite experience is in that city and mixing and blending it with post-USSR, our Slavic experience […] We converted Vancouver into this weird place where you kind of think it’s Vancouver because it looks like it, but on the other hand, it’s a highly classist society.”

This means the game has a lot of “post-Soviet inspirations,” he explains. “There is definitely an oligarchic state with one particular species at the head of it because we’re using anthropomorphic animals to show class injustice.”

Danshin notes that the anthropomorphic animal getup serves as an “amazing tool” to unpack Backbone‘s dystopian themes. “It’s a great way to show how class works because essentially, class and perception of race are human constructs, besides different cultures and stuff like that.”

He says that as you play the game, “you’ll see people struggle with the same things, although they different or similar species.” In Backbone‘s world, the lower-class is represented by different types of rodents, the middle-class consists of the likes of raccoons or foxes, and the upper-class is made up of such animals as dogs and apes. 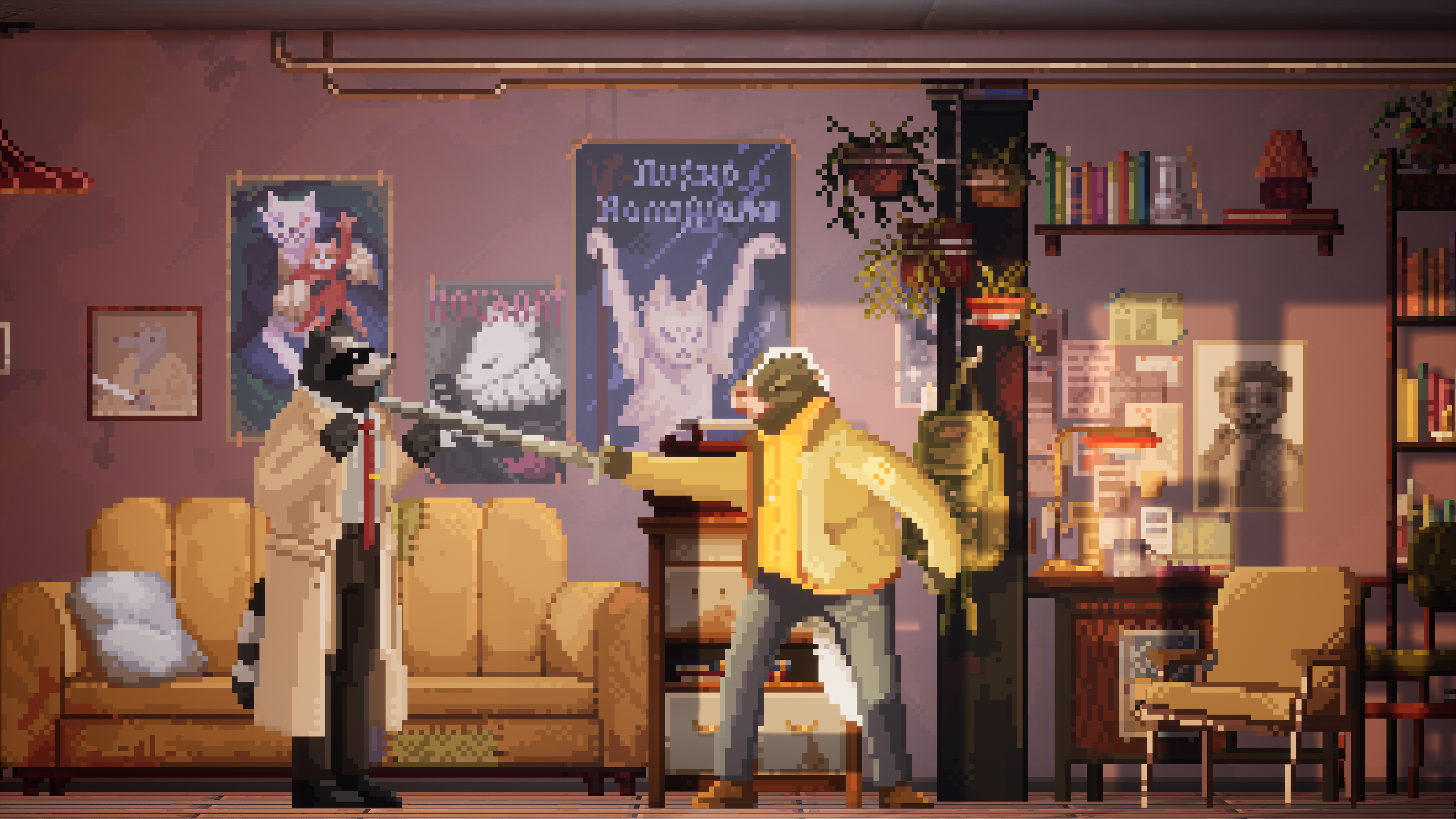 “In our world, they are all [basically] just humans with animal hats where they’re all equal and everything is just created by that propaganda machine.”

While his experiences with raccoons and the city of Vancouver definitely helped with the narrative design of Backbone, Danshin says the team’s decision to go with its striking aesthetic — a mix of pixel art and 3D effects — had rather the opposite effect.

“We decided to do pixel art because we thought it was going to be easier since we didn’t have any 3D modeling experience. We started as a team of three, so we’re just like, ‘let’s do pixel art because everybody can do it.’ That was the worst decision of our lives,” he admits with a laugh.

“Pixel art, I would say, is harder than 3D tools, and the reason for that is we had to make everything from scratch. All of our characters were hand-animated and it was just one animator, hand-painting, frame by frame, all the characters, all the animations, and that was very hard for us.” He said Eggnut has since expanded to having eight artists contributing to the pixel work. 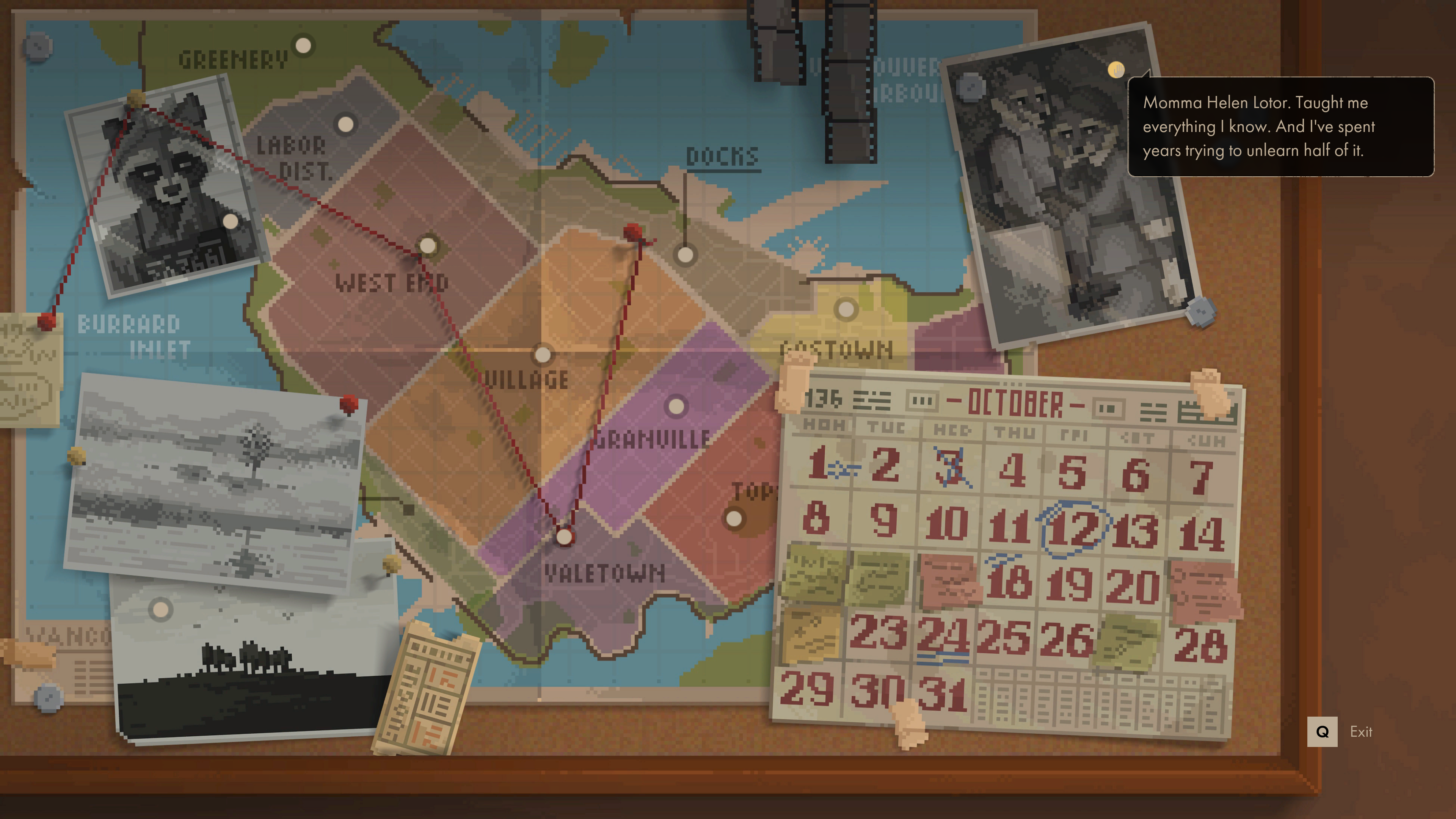 “In comparison to regular pixel art games, one character could be like 10 pixels, while our characters are 100 pixels. So that’s what makes a difference.” Another artist, meanwhile, is responsible for adding stylish 3D effects ranging from dynamic lightning, pouring rain and neon lights. Danshin, for his part, has co-composed Backbone‘s atmospheric soundtrack.

Danshin says he hopes all of these design elements — the characters and setting, the art and the music — will help immerse players in the world of Backbone. To help with that, the game will offer you a variety of dialogue options to give you a degree of control over how certain events play out.

“Throughout the development cycle, we found that the detective experience is actually a bit less important to us. So we’ve switched to more of a personal story of [Howard].”

He’s quick to note that there won’t be multiple endings or a baked-in morality system, but rather, Backbone will let players colour in Howard’s character to a degree. 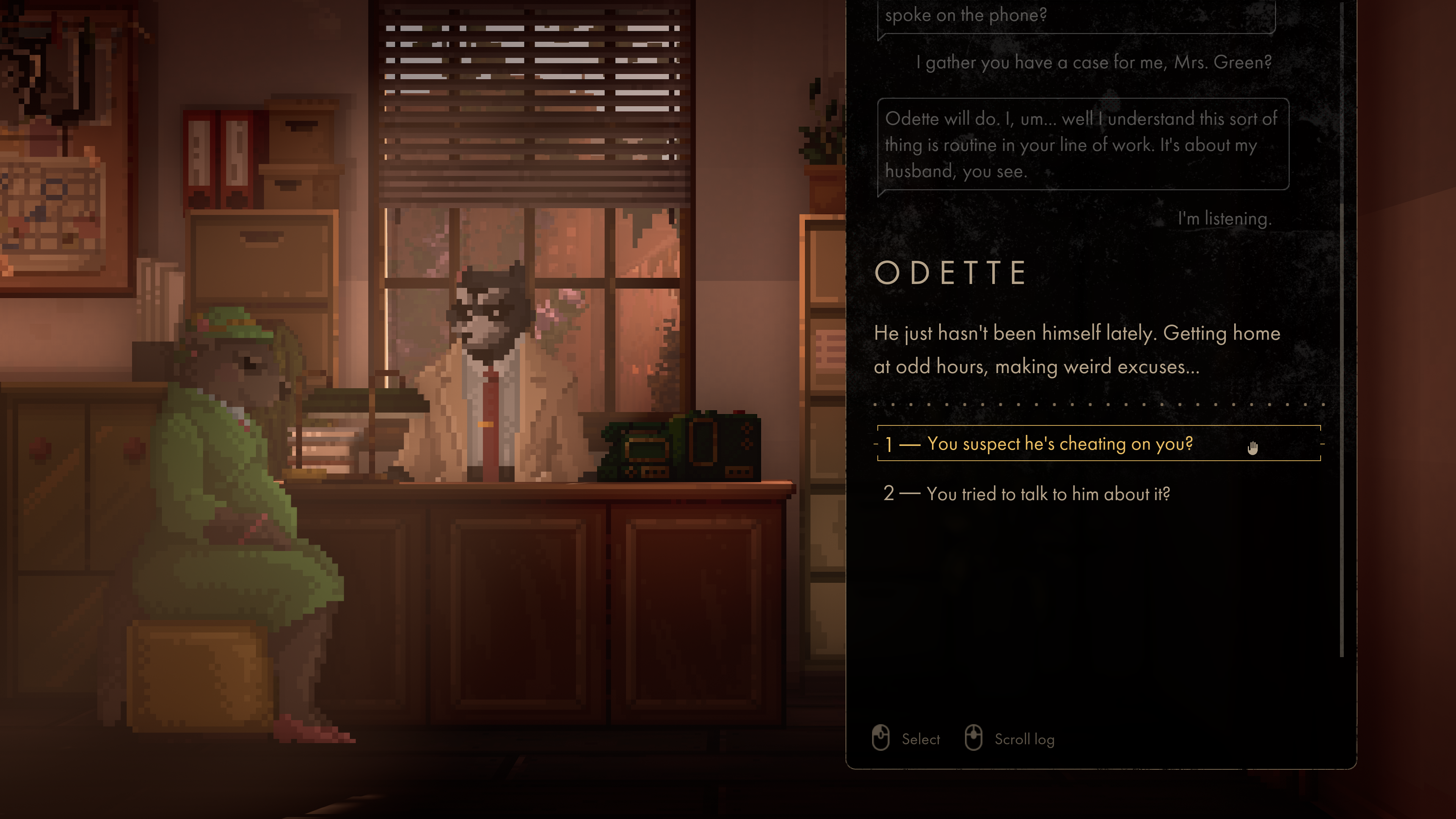 “For us, instead of a multiple-choice adventure where you could reach places in different ways — which you still can in the actual game, there are [sometimes] multiple ways to solve some puzzles and stuff like that — the most important thing is how players can represent themselves through Howard, and through his choices, whether it’s his feelings or how he reacts to different characters or how he approaches certain things.”

With Backbone finally releasing to the world, Danshin says Eggnut is taking a well-earned break.

“First of all, everybody goes on a summer vacation — we want to bring back those childhood feelings of going on summer vacation.” That said, he notes Eggnut’s “already started another project,” which he won’t hint at yet but says “everybody’s excited” about.

Only time will tell what colourful animal-inspired influences this new game might have.

This interview has been edited for language and clarity.

Backbone is now available on Steam, Windows 10 (and Xbox Game Pass for PC), GOG and the Epic Games Store with a special 10 percent off launch discount on all platforms. The game will also come to PS4, Xbox One and Nintendo Switch later this year.

This interview is part of a monthly series of features focused on the developers and other figures at the heart of Canada’s video game industry.