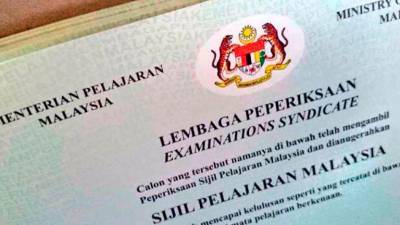 SIBU: Even as Covid-19 cases rise sharply in Sarawak, Irwin Casper Vincent, 17, did not waiver but instead overcame all obstacles in his quest to excel in his Sijil Pelajaran Malaysia (SPM) examinations.

Today, the son of a coffeeshop worker can stand proud as he reaps the rewards of his hard work for the past two years, having obtained 9As in the examination.

“There were many obstacles and setbacks that I had to overcome but I feel what I achieved today is the result of my hard work to focus on my education and by studying smart,” he said when met at his house here yesterday.

Following the rise in Covid-19 cases in the district since January, the Sekolah Menengah Kebangsaan Lanang student was unable to attend school for a few months due to the enforcement of the Movement Control Order (MCO) and had to get used to online learning in a short period of time.

“Previously my friends and I had never been exposed to online learning sessions but with the Covid-19 situation not allowing face-to-face learning, we had to do our best to ensure our preparations were unaffected,” he said.

Irwin said the online learning method prepared by his teachers enabled them to catch up with some subjects that were disrupted following the closure of schools but at the same time, it burnt a hole in his pocket.

“I used a prepaid phone for internet access to follow the online learning and the top up was between RM5 and RM10 daily, which reached up to RM70 a month. This (top up) was borne by my father,” the youngest of three siblings said.

According to him, his father, Vincent Ukie, 62, has been working in a coffeeshop in the city for the past few years after retiring from a company, while his mother, Loh Siu Ing, 54, was a housewife.

Having achieved success in his SPM, Irwin now has set his sights on furthering his studies to realise his ambition of becoming an educator. –Bernama

TM: Broadband Lite 1Mbps Was Launched In 2015; Current Offerings Are Now Under Review