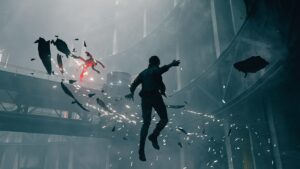 The title focuses on Jesse Faden who needs to harness her supernatural abilities and cool customizable guns in order to grow into her role of the Director of the Bureau and defeat “the Hiss.” The 2019 game was developed by Remedy Entertainment and published by 505 Games.

The game is free for PC on the Epic Games store until June 17th at 11am ET/8am PT.

The post ‘Control’ is free right now in the Epic Games Store appeared first on MobileSyrup.