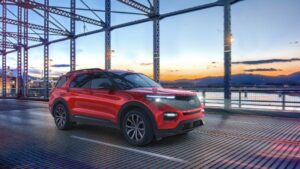 Ford CEO Jim Farley sat down with The New York Times to share that over 100,000 people have reserved the Ford F-150 Lightning and several other hints at the automaker’s electrification roadmap.

It’s been roughly three weeks since Ford revealed the EV truck, so drumming up enough hype to get over 100,000 reservations isn’t bad. That said, in four days, Tesla was able to get 250,000 Cybertruck reservations.

After mentioning the sales milestone, Farely told the Times that there might be a possibility that Ford’s new smaller hybrid Maverick truck will get fully electrified in the future. The Maverick is being positioned less as more of an SUV replacement aimed at people that want decent towing capacity and a small box in the back for storage.

Farley also mentioned that Ford’s next electrified vehicle is likely the Explorer SUV. This is the company’s most popular SUV, and as of May 2021, Ford has already sold 100,000 of them in 2021.

Ford plans to go 40 percent electric, so the company still has an uphill battle to reach that goal, but another electric truck and an EV Explorer would be helpful for the company to diversify its consumer EV lineup that currently only consists of the Mustang Mach-E and the F-150 Lightning.