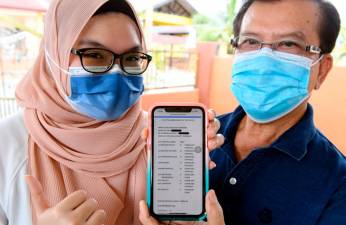 SEREMBAN: Losing her mother a month before the Sijil Pelajaran Malaysia (SPM) trial examinations was a tragic setback, but that did not stop Aleya Atiqah Ibrahim (pix) from scoring 9As in the examination proper.

It was a devastating period for the youngest of three siblings when her mother, Wan Mahanum Wan Muhammad, died last September due to cancer. However, her mother’s last words for Aleya Atiqah to score straight As will forever be ingrained in her memory.

The science stream student from Sekolah Menengah Kebangsaan King George V Seremban said after her mother’s passing, her other family members always encouraged her to stay focused to face the SPM examination.

“The biggest challenge was losing my mother. I was very sad because I am the closest to her. Alhamdulillah, the trial examination results were okay but needed improvement. Then, I became focused and managed excellent results today,” she said when contacted by Bernama.

Making Dr Nur Amalina Che Bakri her idol, Aleya Atiqah said she also aspired to be a doctor to serve the community. The 18-year-old student shared her happy news via Twitter, which received praises from netizens.

She said the home-based teaching and learning online (PdPR) sessions were among the biggest challenges that she had to deal with as she needed time to be focused.

Meanwhile, Nur Rafiqah Najwa Mhd Nazli, 18, said she was happy to have scored 8As in her SPM examination.

“I allocate nine hours daily to revise my subjects,” she said, adding that she dedicates this success to her 45-year-old mother, Siti Rohaliza Sahamin, who always encourages and motivates her to prepare for SPM amid the Covid-19 pandemic.

Since her father died in 2015 in a road accident, her mother, who works as a kindergarten teacher, has been the backbone of the family to provide a better life for the four siblings.

“I stayed in the hostel, away from my family who reside in Sungai Pelek, Selangor. My mother always gives me encouraging words and prayers for me to excel,” she said.

The second of four siblings said although she felt discouraged as the examination was postponed several times, Nur Rafiqah Najwa did not allow emotional factors to influence her.

She said she faced various challenges, including poor internet access, especially during rainy days, causing lessions to be interrupted. — Bernama