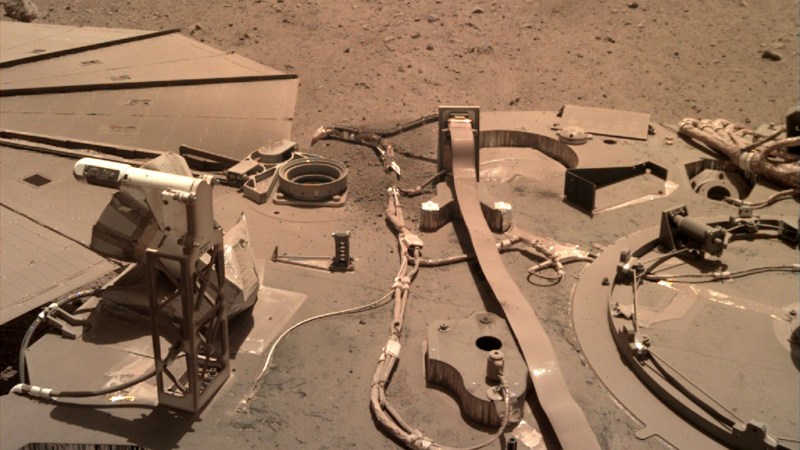 We love that part in Apollo 13 where the NASA engineers have to fit a square carbon dioxide filter in a round hole. We love basically every scene of The Martian where Mark Watney hacks together any piece of hardware he can get his hands on to survive on a hostile planet. What we love even more is watching actual NASA engineers trying out a hack and ordering the InSight lander to scoop sand on itself to increase the power from its solar panels.

InSight, which recently had its two-year mission to study the interior geology of Mars extended, has been suffering from a buildup of dust on its solar panels. This dust is only adding on to the expected power loss which occurs as the red planet approaches aphelion — the maximum distance from the Sun in its orbit. Attempts to shake the panels clear by pulsing their deployment motors were unsuccessful. Other solar-powered missions have experienced a cleaning effect from the Martian winds; however, despite seeing plenty of gusts, InSight has not seen any significant improvement.

Counterintuitively, operators instructed the lander to slowly trickle more dust and sand from its scoop close to (not on top of) one of the solar panels. As the wind blew, larger particles were carried by the breeze across the panels and bounced off the surface, carrying away some accumulated dust. While that may sound like a minuscule effect, the experiment resulted in about 30 extra watt-hours per Sol. Margins are still thin, and science instruments will still need to be disabled to conserve power. But this boost alone was enough to delay the powerdown for a few weeks.

There are so many exciting missions operating on Mars right now. Though, it’s also fun to take a look back at some of the earliest probes. And we’re always amazed at the resources NASA makes available for us to have some DIY fun.