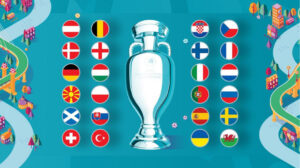 The long-awaited Euro 2021 finally kicks off today with Turkey facing off against Italy at the Stadio Olimpico in Rome.

Going into the tournament, the stacked France team, that includes Kylian Mbappé, N’Golo Kante, Paul Pogba, Antoine Griezmann, led by Didier Deschamps is predicted to take home the trophy, while the reigning champs — Cristiano Ronaldo’s Portugal — are one of the fan favourites.

Two Canadian media outlets have been given the broadcast rights to the tournament, CTV and its sports specialty channel TSN and TVA.

Here is an in-depth guide on how you can watch the Euro 2021 in Canada:

All Euro 2021 games will be available to watch on one of TSN’s five channels, with weekend games available on CTV and TSN. Most cable service providers, including Bell, Rogers and Shaw have these channels in their catalogue.

Similarly, if your cable provider is Vidéotron, Cogeco, or Telus, you should have access to TVA Sports for coverage of all games in French.

If you have a cable connection that gives you access to the five TSN channels, you can use your cable credentials to log in to the TSN website and watch the games live. Additionally, the same can be done over TSN’s dedicated app.

TSN’s app is available on Android and iOS.

The same procedure follows for French broadcast. If your cable provides you with the TVA Sports channel, you can use your cable credentials to log into the TVA Sports website and mobile apps to live stream the battle of the nations.

TVA Sports’ app can be downloaded on Android here and iOS here.

You can also check if your cable provider has its own dedicated website or mobile app which gives you access to view all channels online. For example, Rogers cable customers can visit Rogers Anyplace TV to view the games on the go and Bell cable users can visit Fibe TV.

UEFA EURO 2021 is also available on-demand through TSN Direct, which is the company’s online subscription program that gives you access to the TSN channels on the website and dedicated app.

The subscriptions are as follows:

Similarly, if you want to watch the Euro 2021 on-demand in French, TVA Sports Direct should be your go-to. TVA’s subscription gives you access to live stream the games on the company’s website and dedicated app.

The subscriptions are as follows:

The post How to watch Euro 2021 in Canada appeared first on MobileSyrup.