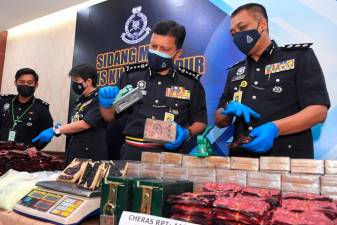 KUALA LUMPUR: Police arrested three individuals, including a married couple, suspected of being involved in a drug trafficking syndicate worth an estimated RM9.3 million in Cheras and Kajang, last Saturday.

All the suspects were locals between 21 and 31 years old.

Kuala Lumpur police chief Datuk Azmi Abu Kassim said his department had raided four houses and found various drugs in one of them.

“The investigation found that all their premises were used as drug storage locations and had been rented for three months by one of the suspects with a rental payment of RM1,000 to RM2,000 a month.

“The trio tested negative for drug use. However, all of them were found to have previous drug-related criminal records,“ he said at a press conference at the Kuala Lumpur Contingent Police Headquarters, here, today.

All suspects were remanded under Section 117 of the Criminal Procedure Code from June 6 to June 11 for investigation under Section 39 (B) of the Dangerous Drugs Act 1952. — Bernama