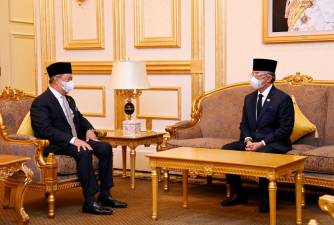 PETALING JAYA: The summoning of political party leaders by the Yang di-Pertuan Agong Al-Sultan Abdulllah Ri’ayatuddin Al-Mustafa Billah Shah and the convening of a special rulers’ meeting show that the King is concerned about issues facing the nation.

Universiti Malaya socio-political analyst Awang Azman Awang Pawi said the King has taken cognisance of problems facing the people due to the pandemic.

The Ruler is also possibly considering the fact that the emergency declaration is coming to an end and Parliament should reconvene by Aug 1, he said, adding that the meeting with political leaders to get their opinions will make it easier for him to present his views when the Council of Rulers meets next week.

The King’s actions go beyond politics and he wants to know how to tackle issues facing the public. He is well aware that people have lost their jobs and need help but none is forthcoming. The M40 group is also hit hard, Awang Azman said.

The closure of Parliament is also an issue because other pandemic-stricken countries have not declared emergency and their Parliament continues to meet, he told theSun.

Political analyst Lim Tek Ghee said it is important for the rulers to have a united stand on how to tackle the multiple crises, especially political, facing the nation.

Reaching out to the heads of the main political parties is necessary to get their feedback on what should happen next on the political front when Parliament reconvenes, he said.

“There is little doubt that the failure of Parliament to reconvene will be greeted with opposition and dismay from the public.”

Awang Azman said the standard operating procedures for the MCO is “all over the place”, and this could have given the King the impression that the government has lost its direction.

“When the price of a staple like cooking oil goes up so high without the government trying to curb the hike, it may indicate how the King views the present government.”

Awang Azman said a rudderless government is dangerous for the nation and it leaves the King with no option but to step in to get the views of political leaders.