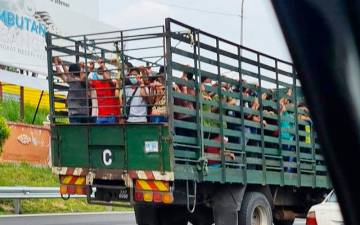 Kuala Muda district police chief ACP Adzli Abu Shah said that on being alerted to the incident at about 5 pm, police immediately tracked down the lorry and detained the driver in Sungai Lalang, Bedong near here.

“The lorry was on its way back from the Kuala Muda PKD (District Health Office) to the hostel of a chicken processing factory in Sungai Lalang.

“On inspection, we found 48 Covid-19 positive individuals wearing a quarantine wristband in the lorry,“ he said in a statement here yesterday.

Yesterday, a 19-second video and some pictures of a lorry packed with workers wearing pink wristbands went viral on Facebook, receiving various reactions from netizens.

Adzli said the Kuala Muda PKD had instructed 135 factory workers to show up for investigation and to wear the quarantine wristband following the detection of positive Covid-19 cases at the chicken processing plant.

“The employer arranged for a special lorry to bring all 135 positive cases on three trips to the Kuala Muda PKD – the lorry carrying the 48 individuals arrested earlier was making the third trip,“ he said.

Adzli said police took action against the 51-year-old lorry driver under Section 23 (2) of the Road Transport Act 1987 for misusing a Motor Vehicle Licence.

He said an investigation paper was opened against the factory manager, who is 43 years old, under Section 22 (b) of the Prevention and Control of Infectious Diseases Act 1988 (Act 342) for not complying with an order issued by an authorised officer.

“The employer will also be investigated under Section 270 of the Penal Code for negligent or mischievous acts that may cause an infection with a life-threatening disease,” he said. –Bernama