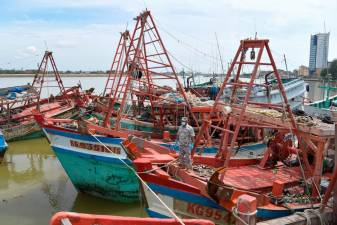 KUALA TERENGGANU: The Malaysian Maritime Enforcement Agency (MMEA) has detained four Vietnamese fishing boats for encroachment and fishing in the waters off Terengganu.

Terengganu MMEA director Maritime Captain Muhammad Suffi Mohd Ramli said the four boats were detained at locations 77 to 78 nautical miles off here between 4am and 6am on Monday.

“Upon detecting more than four Vietnamese fishing boats at these locations, MMEA directed the Nusa maritime vessel to the scene.

“They managed to detain three ‘female’ boats and one ‘male’ boat,” he told a media conference at the Terengganu maritime headquarters here today.

Muhammad Suffi said the 46 crew members including the skipper, aged 15 to 62, did not have any valid identification document and were arrested and taken to the Terengganu MMEA jetty for Covid-19 screening.

The case is being investigated under Section 15(1)(a) of the Fisheries Act 1985 for encroachment and illegal fishing in national waters, and the Immigration Act 1959/63.

He said MMEA would not compromise with foreign fishermen caught fishing in Malaysian waters.

He said 103 boats had been detained and seizures worth RM154.5 million had been made through Op Kuda Laut which was conducted in the east coast waters between June 25 last year and yesterday. — Bernama