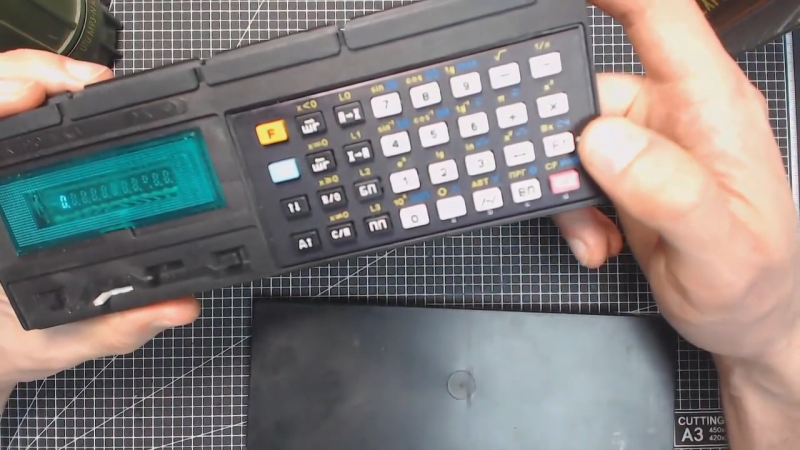 Say what you want about Soviet technology, but you’ve got to admit there was a certain style to Cold War-era electronics. Things were perhaps not as streamlined and sleek as their Western equivalents, but then again, just look at the Nixie tube craze to see where collectors and enthusiasts stand on that comparison.

One particularly interesting artifact from the later part of that era was the lovely Elektronika MK-52 “microcalculator”. [Paul Hoets] has done a careful but thorough teardown of a fine example of this late-80s machine. The programmable calculator was obviously geared toward scientific and engineering users, but [Paul] relates how later versions of it were also used by the financial community to root out banking fraud and even had built-in cryptographic functions, which made encrypting text easy.

The video below the break shows the teardown, detailing the mostly through-hole construction and the interesting use of a daughter-board, which appears to hold the high-voltage section needed to drive the 11-character VFD tube. The calculator appears to be very well cared for, and once reassembled looks like it would be up for another ride on a Soyuz, where once it served as a backup for landing calculations.

We love the look of this machine and appreciate [Paul]’s teardown and analysis. But you say that the Cyrillic keyboard has you stumped and you need a bilingual version of the MK-52? That’s not a problem.

Citing Home Ministry's 0.89pc approval rate since 2018, Malaysian mothers ask when Federal Constitution will be amended to give their children equal citizenship rights

Nurul Izzah: Govt must look into initiatives for single women households as they suffer higher deprivations