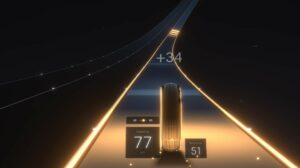 Lanebreak is more like a rhythm game — think ‘Tap Tap,‘ but you won’t be tapping anything. Instead, you’ll have to pedal at certain cadences or resistances along a highway that could only be described as something from Tron.

Additionally, there will be various difficulty levels and different music to listen to, which all get chosen before a game starts.

Further, there will be three different types of challenges. With Pickups, as long as you’re in the right lane you’ll earn points; you change lanes by turning up or down the resistance dial. Meanwhile, Streams will earn you points by your cadence and Breakers earns you points based on how much energy you output.

The game will only be available for Peloton bike owners and subscribers. The game isn’t available yet, but a beta will open later this year, and there’s currently no way to sign up.

Peloton Canada’s website doesn’t offer any information about the game, so it’s possible the game’s beta — or even the game — won’t be available in Canada at first.