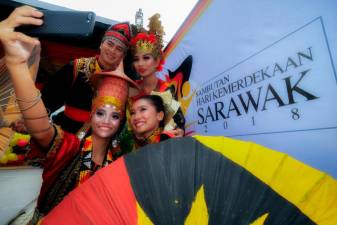 KUCHING: The capability to make its own decisions in the interest of Sarawak should reflect the identity of the people of Sarawak in deciding their future so that they can stand tall among states or nations which are already ahead.

Chief Minister, Datuk Patinggi Abang Johari Tun Openg said although the Sarawak Government respected the decisions which were made at the federal government level, not all were suitable or practical for implementation in Sarawak.

“Sarawak is a region which is almost as big as peninsular Malaysia, and sometimes with resources and infrastructural constraints, it is quite difficult for our authorities to implement decisions which have been made at the federal level,” he said in his message in conjunction with Sarawak Day celebration today.

According to Abang Johari, Sarawak appreciated the authority provided under the Malaysian Constitution to make decisions which were in keeping with the conditions in Sarawak so that they were more practical and effective, specifically in tackling the Covid19 pandemic currently.

“The space enables us to make suitable decisions according to the needs of Sarawak and also enabled us to take measures to speed up the process of vaccination in Sarawak,” he said.

Abang Johari said the State Disaster Management Committee (JPBN) with the co-operation of numerous parties including the Malaysian Armed Forces had been able to set up vaccine centres at workplaces as well as mobile teams for those who could not come to the vaccination centre.

“Thank god, with all these measures, Sarawak is among the earliest states in the vaccination programme to have more than 60 per cent or 2.2 million of its adult receiving their first dose,” he said.

He said the measures implemented had been successful reduced the daily cases of Covid-19 infection lately.

Abang Johari also expressed his appreciation to parties who came forward to help those who ran out of food supplies during the Movement Control Order (MCO) after missing out Sarawak government’s Sarawakku Sayang Special Assistance (BKSS) and the federal government’s People’s Protection and Economic Recovery Package (Pemulih).

“On behalf of the government, I thank all parties who were willing to help without expecting any reward.

“I am also overwhelmed at the commitment of our frontliners who have slogged and contributed their services to tackle the Covid-19 pandemic since last year,” he said.

According to Abang Johari, the celebration this time is more meaningful with the launching of the post Covid-19 plan aimed at drawing up the direction of Sarawak’s economy until 2030 by taking into account the impact from the pandemic.

“I am very confident with our policies and we can take the development of state’s economy to a higher level and boost the income of the people with value-added products,” he added.-Bernama