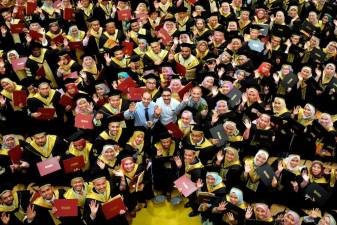 Public and private companies are now less willing to accept them, citing costs and the difficulties they are experiencing in the economic fallout caused by the Covid-19 pandemic.

This has put many of them in a dilemma. For instance, public university engineering student Fadhil Kamil Adhar, 25, said he would have to sit through another semester if he fails to get an internship.

An internship, basically a stint in the workforce, is now a requirement at university. A student who fails to get an internship may have to stay longer in varsity or not graduate at all.

It is the practice for public and private companies to take in such students as interns to enable them to learn the ropes in areas that are relevant to their chosen courses.

Fadhil told theSun he and many of his coursemates have come to a dead end in their pursuit of an internship.

The Covid-19 pandemic has led to many business closures, leaving few companies prepared to spend the extra money on training a rookie who may not eventually seek permanent employment in the organisation.

Fadhil said he had sent out “countless applications” but has yet to get a positive response.

“Our lecturers are also doing their best to help us here, but they too have hit the wall,” he said.

Ultimately, he believes that knowing the right people may turn out to be his only chance of getting an internship. “Some of my friends have managed to get industrial placements thanks to the ‘connections’ they have,” he said.

A 24-year-old private university student, who wants to be known only as Ravin, told theSun his failure to get an internship has been “depressing and demotivating”.

“Most companies that I sought out are also struggling financially while others have since closed down. I really can’t blame them for not taking me in,” he said.

Even more disappointing, Ravin said, is that he has had companies making offers only to rescind them later.

“They told me that they could not take me in after all because of the changes in the (Covid-19) standard operating procedures,” he said.

To make matters worse for Ravin, his father is in hospital after having been infected with Covid-19.

National Association of Private Educational Institutions president Prof Elajsolan Mohan said it has been a challenging year, too, for the private higher educational institutions.

“It has become more challenging to get an internship given that many businesses have closed down,” he told theSun.

However, the Higher Education Ministry has come up with an alternative.

Students who fail to secure an internship now have the option to take on industry-based projects, problem-based projects, topical studies or research projects under a relaxation introduced by the Malaysian Qualifications Agency (MQA).

Elajsolan said such projects should be designed to help students achieve the outcomes and skills sets as outline in the internship programme standards.

To ensure safety, the ministry has issued a circular outlining the requirements that companies and students have to observe during the internship programme.

“Private higher educational institutions are required to provide each student with a letter stating the requirements for the internship and another letter from the company stating that it is prepared to accepted the student.

“Armed with these two letters, a student would be allowed to travel, specifically for the purpose of internship,” Elajsolan explained.

Students whose internship has been interrupted halfway are allowed to continue by enrolling for the projects outlined under the MQA guidelines.

“Most essential is that students learn the skill sets they need for their future in the workforce,” Elajsolan added.