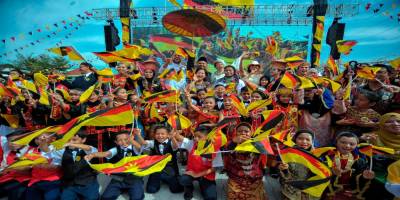 KUCHING: Despite the absence of a grand celebration, no thanks to the Covid-19 pandemic, all Sarawakians are set to observe Sarawak Day on July 22 with strong spirit and resilience.

They are bound to emulate the strong spirit and resilience that their forefathers had shown as they stepped up to steer their homeland on the journey of independence 58 years ago.

It has been a journey full of trials and tribulations, but one that had undeniably accorded many triumphs for Sarawak since that sacred date in 1963 when the last British colonial governor, Sir Alexander Waddell, stepped down and handed the administration of Sarawak to her own people.

Flipping through the chronology of Sarawak history, one learns that Tan Sri Stephen Kalong Ningkan became the first Sarawakian to head the administration, thus bringing to an end a combined 122 years of rule under the White Rajahs, the Japanese, the Australian Army and, eventually, the British.

Taking over the administration had not come without new challenges for Sarawakians as the Communist insurgency as well as resistance from neighbouring Indonesia to the idea of the formation of Malaysia prevailed in the initial years of self-governance.

Nevertheless, Sarawakians persevered. They accepted the invitation from the Federation of Malaya to become partners to form a new nation called Malaysia, along with Singapore and Sabah, which was formally declared on Sept 16, 1963. (Singapore left the federation in 1965.)

By August 1966, the confrontation initiated by Indonesia under their then president Sukarno officially ended, which enabled Sarawak to overcome one of the obstacles it had encountered post-independence.

However, it took Sarawak 24 more years, after the end of the confrontation, to finally put a close to the Communist insurgency, in 1990, with the world also witnessing thereafter the collapse of many communist-led countries including the Soviet Union.

The two ‘Cs’ — Confrontation and Communism — had marked the darker days Sarawakians had to go through during the dawn of their independence years and, ironically, one more ‘C’ emerged as yet another challenge in 2020 when Sarawak attained the independent age of 57.

By March 2020, Sarawak recorded its first case of the coronavirus that was eventually renamed Covid-19. Sarawak held the fort well to contain the situation by ending the year with 1,117 cases with 22 deaths.

The Sarawak Government realised the impact of the Covid-19 pandemic to the economy, and came up with a special assistance known as Bantuan Khas Sarawakku Sayang, or BKSS in short, to ease the financial burden of the people.

The assistance, which accumulated more than RM3.2 billion, was distributed in six packages between April last year and May this year covering, among others, cash aid, utilities discounts, special payments and soft loans for small and medium enterprises.

Besides the provision of these forms of immediate assistance, the government led by Chief Minister Datuk Patinggi Abang Johari Tun Openg has not drifted from its long-term vision to make Sarawak a high-income developed state by 2030.

“This (aspiration to become a developed and high-income state) is not hollow confidence because our economic fundamentals are strong, our policies structured and realigned after Covid-19, while our political stability is the envy of others,” he said when touching on the vision.

Abang Johari’s statement reflects the confidence of all Sarawakians ever since they took their first step to self-governing their beloved Sarawak.

Undeniably, this spirit will reignite whenever July 22 comes by every year. Happy Sarawak Day! –Bernama