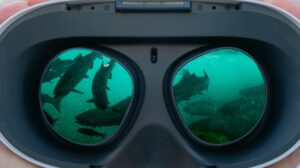 Uninterrupted is bringing ‘swimming with the fishes’ to virtual reality (VR). Uninterrupted in Vancouver offers a look at the difficult journey of the Pacific salmon through a 25-minute VR experience.

You’ll be able to watch salmon with visual storytelling, music, sound effects and the voice of Neskonlith elder Mary Thomas speaking in the Secwepemctsín language, according to CBC.

This is a follow-up to Uninterrupted’s pilot project that launched back in 2017.

The footage was shot during four different salmon migrations throughout four years across three different rivers in B.C.

This is a pretty cool usage of synchronized VR, which offers the virtual reality experience in a small group. Uninterrupted is presenting this experience outdoors.

Uninterrupted has 20 VR headsets that are connected to a local area network to a central computer. When you arrive and check-in, you’ll need to wear a mask, but when you’re in your seat you can take it off.

Seating will also be socially distanced at two metres apart.

The post Vancouver’s Uninterrupted lets you swim with the fishes in VR appeared first on MobileSyrup.