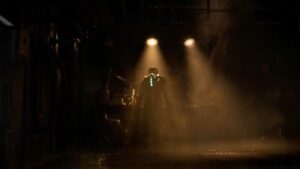 Following a month of rumours, EA has confirmed that it’s bringing back its acclaimed Dead Space survival horror series.

As previous reports suggested, the new game is being developed by Montreal’s EA Motive (Star Wars: Squadrons) and serves as a remake of the original Dead Space.

Survive the spine-chilling horrors of the USG Ishimura in #DeadSpace – A classic rebuilt by @MotiveStudio. pic.twitter.com/NwCrUK9iYS

The brief announcement trailer didn’t reveal any gameplay, but it did show a Necromorph alien in the Ishimura spaceship and engineer Isaac Clarke suited up in his signature armour.

Developed by the now-defunct Visceral Games, the original acclaimed 2008 Dead Space followed Clarke as he fought against the Xenomorph threat in the derelict Ishimura. Visceral went on to make two more mainline Dead Space games, although the series has been dormant since 2013’s Dead Space 3.

In an interview with IGN, EA Motive explained that its vision for the remake is to be faithful to the original while “rebuilding” visuals, sound, gameplay and more. To help with this, the developer says it’s only releasing the game on PlayStation 5, Xbox Series X/S and PC to take advantage of the improved hardware, including the faster SSDs and 3D audio.

Motive also confirmed that there will be no microtransactions in the remake, which have been sources of controversy in previous EA games like Star Wars Battlefront II.

EA did not provide a release date for the Dead Space remake.