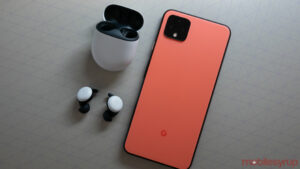 Google has, in a way, confirmed that it no longer sells the second-gen Pixel Buds, also called Pixel Buds (2020), in Canada.

It’s not exactly new news, but it’s nice to see at least some level of official confirmation. Back in June, the Buds went out of stock on the search giant’s online store. At the time, several websites — including MobileSyrup — reported that the change was likely due to Google phasing out the Buds (2020) in favour of the new, more affordable Pixel Buds A-Series.

While it remains unclear why Google has stopped selling the Pixel Buds (2020) in Canada, Android Police recently reported that the Google Store’s product availability tracker lists the earbuds as available in only a few countries. Canada isn’t on the list, nor is the U.S. or Taiwan.

For any Canadians interested in buying Pixel Buds, there are two options. The first is waiting for Google to announce new premium-tier Pixel Buds (perhaps alongside the Pixel 6 in the fall). The other option is to buy the cheaper Pixel Buds A-Series.

That second option might not be that bad, actually. At $139, the Buds A are reasonably priced. Plus, they only lack a few features compared to the Buds (2020), namely on-bud volume controls, talk-detecting motion sensors and a wireless charging case. MobileSyrup’s Patrick O’Rourke liked the Buds A-Series when he took them for a spin earlier this year despite the few missing features.