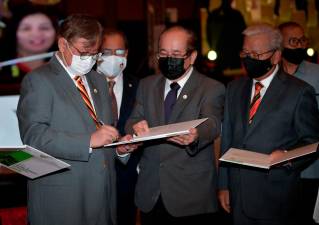 “I am confident we can achieve its objectives based on our achievements in the last four years in our infrastructure development like water, electricity and road connectivity,” he told a media conference after the launching of PCDS 2030, here, today.

He said the first phase of PCDS 2030 would be implemented under the 12th Malaysia Plan (2021-2025) with the target of maintaining an average economic growth of between six and eight percent per annum from this year until 2030.

According to him, the Sarawak government is committing an estimated RM63 billion to implement the PCDS 2030 under the 12MP whereby, RM30 billion will come from direct development expenditure and RM33 billion from alternative funding.

“Through this creative financial modelling and revenue reengineering, we will continue to enjoy a healthy fiscal position and in line with the strategic thrusts of the PCDS 2030, the public capital spending will be on areas that yield the most economic, social and environmental impact,” he said.

Abang Johari said the focus of PCDS 2030 would be on developing basic infrastructure, namely, roads and bridges, and providing treated water and electricity supply and telecommunications network as the enablers for Sarawak to leapfrog into the second phase of development, which would be talent, skills and innovation-driven.

According to him, economic development will be accelerated by seven strategic thrusts, namely, transforming Sarawak into a competitive economy, improving ease of doing business to facilitate domestic and foreign investments, and spending on areas yielding the most economic, social and environmental impact.

The efforts also include optimising use of assets and government funding and developing human capital to support socio-economic development, accelerating digital adoption and data utilisation to generate outcomes, driving economic and social benefits for all Sarawakians, and balancing economic growth with environmental sustainability.

“This plan is to prosper the state and its people, and to protect its environment for sustainable development,” he said. — Bernama