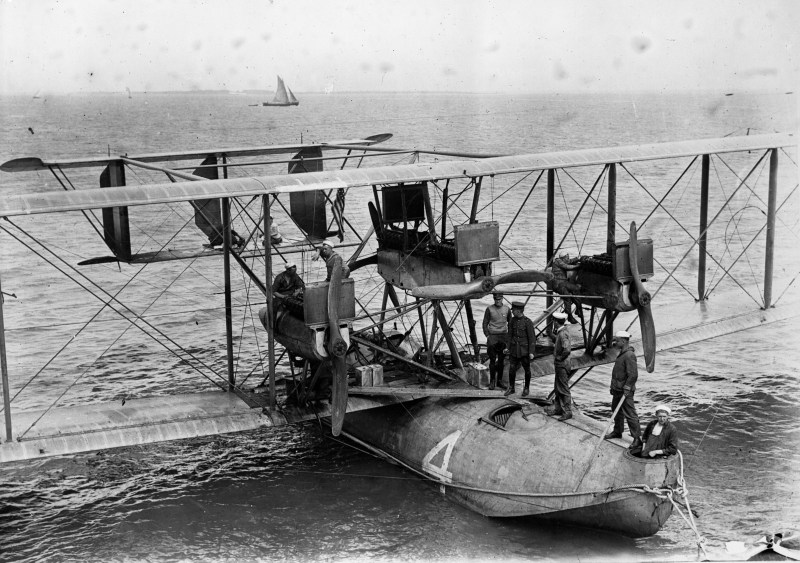 Aviation history is a bit strange. People tend to remember some firsts but not others and — sometimes — not even firsts. For example, everyone knows Amelia Earhart attempted to be the first woman to fly around the globe. She failed, but do you know who succeeded? It was Jerrie Mock. How about the first person to do it? Wiley Post, a name largely forgotten by the public. Charles Lindbergh is another great example. He was the first person to fly across the Atlantic, right? Not exactly. The story of the real first transatlantic flight is one of aviation hacking by the United States Navy.

The Quest for a Flying Boat

Airplanes really got their start with the Wright brother’s flight in 1903 — even though you can make the case for some earlier flights — and by 1914 there was already talk of taking a flying boat across the Atlantic. However, the engines of the day weren’t that reliable and the plane had to be able to lift enough fuel to make it between refueling points. That limited the choices of places to take off and land.

In 1914, a British philanthropist had Glenn Curtiss built a flying boat with a 72-foot wingspan, mounted three engines, and called it America. It was supposed to fly the Atlantic, but with the onset of the Great War, that never happened.

The United States also wanted flying boats during the war, mostly for antisubmarine warfare. In 1917 the Navy and Curtiss decided to produce the NC or Navy-Curtiss flying boat, commonly called Nancies. This was a big plane for its day at 69 feet in length with a wingspan about the same as the 108 feet of a Boeing 727. By 1918, the first 12-ton Nancy made its maiden flight.

The Navy decided that three NC flying boats should cross the Atlantic. Of course, sending a plane across the Atlantic today isn’t a big deal, but in 1918 this was equivalent to announcing you were going to the moon in 1969. Future president and then assistant secretary of the Navy Franklin D. Roosevelt was a major supporter of the idea of a flight. But flying was only one part of the bigger puzzle.

Richard Byrd, another name you might know from history, was also involved in the project. He would later become famous for polar expeditions, but during the war he had developed tools and techniques to improve navigation while over water. In particular, he worked with the bubble sextant. Ships use the horizon when measuring with a sextant but airplanes need a different means since they are elevated above the surface and not finding a natural level on water. A bubble sextant provides an alternative to the natural horizon to measure from.

Byrd also employed drift indicators that used a reference point on the ground to determine how far the plane was drifting. Both of these would be useful to planes trying to cross the ocean. While he didn’t get to actually make the flight, he did help in the planning.

To help ensure success, the Navy posted 61 ships roughly every 50 miles along the route to help with navigation and to rescue the crews, if necessary. That’s amazing when you think about the logistics of lining up 61 ships on a precise path.

Three flying boats were to participate. NC1, NC3, and NC4. The NC2 had its wing removed to repair one of the other planes. The planes also got an extra engine and super-efficient propellers based on the equations developed by engineer Charles Olmsted. These propellers were 20% more efficient than conventional ones. So you’d think with all this support the three planes would make it across with no difficulties. But it wasn’t that straightforward.

The three planes departed Rockaway (part of New York City) on May 8, 1919 to head for Newfoundland. NC-4 lost two engines and had to land in the ocean near Cape Cod. The aircraft acted like a boat for five hours to reach the naval air station at Chatham. The other planes landed in about nine hours, but NC-4 didn’t catch up until May 14th. The press speculated that NC-4, practically on its maiden voyage, was a lame duck and would be left behind.

There was another problem. The new propellers were cracking on all three planes. The decision was made to go back to the standard ones.

The two planes, NC-1 and NC-3, tried to depart on May 10th without the NC-4, but were too heavy to lift out of the water. Once NC-4 rejoined the trio, they tried again, successfully, on May 16th.

The navigation instruments were poor, but they did have the string of Navy destroyers every 50 miles to light the way. NC-3 had an electrical failure and the planes separated from formation to avoid hitting the dark plane. Once fog became heavy, it was difficult to find each other or the ships visually. However, the pilot in NC-3 sighted a destroyer that was not part of the navigation line and thinking it was one of the ships guiding them to the Azores, corrected course.

Eventually, it was apparent he should be close to the Azores, but couldn’t find the next ship. The plane set down in rough waters which collapsed an engine strut, grounding NC-3. NC-1 also landed to try to get a position fix and, while undamaged, the seas were too high for the plane to take off again, effectively ending its mission.

That left NC-4, the lame duck plane that almost didn’t get started. It was also the fastest of the three planes. It cut through the fog, the crew fighting disorientation. They knew from a radio fix and dead reckoning that they were close to their destination. Finally, a break in the fog let them glimpse one of the islands and that information led them to find a suitable harbor to land in. The lame duck had made it.

NC-1’s crew was taken off by a Greek freighter. It eventually sunk beneath the waves. NC-3, however, was missing for a few days. To reduce weight, the crew had stripped out nearly everything from the aircraft including the radio transmitter. Unable to take off in rough seas, the crew used the tail of the airplane as a sail and went over 200 miles tail first to sail to the Azores. While not an aviation first, it was dazzling seamanship.

The crew of NC-4 — Albert Read, Walter Hinton, Elmer Stone, James Breese, Eugene Rhoads, and Herbert Rodd — are in good company. No one remembers Wiley Post or Jerri Mock, either. Later in 1919, Alcock and Brown flew a biplane from Newfoundland to Ireland, winning £10,000. A few weeks later an airship made the crossing and even carried a few passengers.

As you can see at the 6:33 mark in the video below, Read and Rhoads would duplicate their flight in 1949 much faster in a contemporary aircraft. There’s also newsreel footage there from the 1919 flight.

Why do we remember Charles Lindbergh? Well, he flew nonstop and landed on the European mainland. Everyone else hopped from place to place like the NC-4 did. He also benefited from great press, a different public sentiment about flying, and that he flew alone. The tragic kidnapping of his baby after the flight also cemented him as a public figure. Then, too, he was an inventor, but the world seems to have forgotten that for the most part.

Earlier, we talked about technical audacity. Flying a 1920-era airplane across the Atlantic would seem to qualify. Those early pioneers developed techniques and learned lessons that would help make transoceanic flight commonplace very quickly. Yet we scarcely remember who they were.