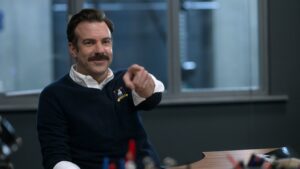 Ted Lasso‘s second season premiere had the biggest debut audience of any Apple TV+ series or film, Apple has revealed.

The first episode of the soccer comedy’s sophomore outing premiered on July 23rd, with new episodes set to release every subsequent Friday. Therefore, Apple’s metrics take into account the first three days that the Season 2 premiere has been available to stream.

However, with Apple not providing any further details, it’s unclear exactly how many people actually tuned in. Unlike network television, streaming service viewership isn’t tracked through traditional, publicly verifiable platforms like Nielsen. Therefore, companies like Apple can make general statements like “biggest premiere” without quantifying what that means. Similarly, Netflix counts anyone who spent a minimum of two minutes on a title as a “viewer,” which, of course, reveals very little.

For context, Apple last said that the Tom Hanks-led drama film Greyhound had its biggest TV+ premiere, so we at least know that demand was higher for Ted Lasso.

Apple did also note that Ted Lasso‘s second season premiere was six times bigger than that of its inaugural season. Further, overall Apple TV+ viewership increased by 200 percent during the Season 2 premiere weekend, leading to an unspecified boost in viewership of fellow comedy series Mythic Quest, Schmigadoon! and Physical.

While it’s unclear exactly how many people are watching Ted Lasso, we do know that the show is a critical darling, having recently garnered 20 Emmy nominations. The series, which stars Jason Sudeikis as an inexperienced yet ever-optimistic football coach, has been praised for its humour and heartwarming focus on kindness.

Apple has already renewed Ted Lasso for a third season.

An Apple TV+ subscription normally costs $5.99 CAD/month, but PS5 owners can now claim a six-month free membership to the service.